Westport was voted the best place in Ireland to live recently, and offers plenty for the visitors to experience, such as Westport House and Pirate Adventure Park, which is popular with families. This delightfully laid out town boasts elegant Georgian streetscapes and effortlessly friendly character making it an authentic but lively holiday base. The Westport area offers a wide range of sporting and outdoor activities including golf, sailing, angling, walking, cycling and horse riding. In nearby Murrisk, Croagh Patrick provides an arresting backdrop to the town and has its pilgrim climb on the last Sunday of July each year. 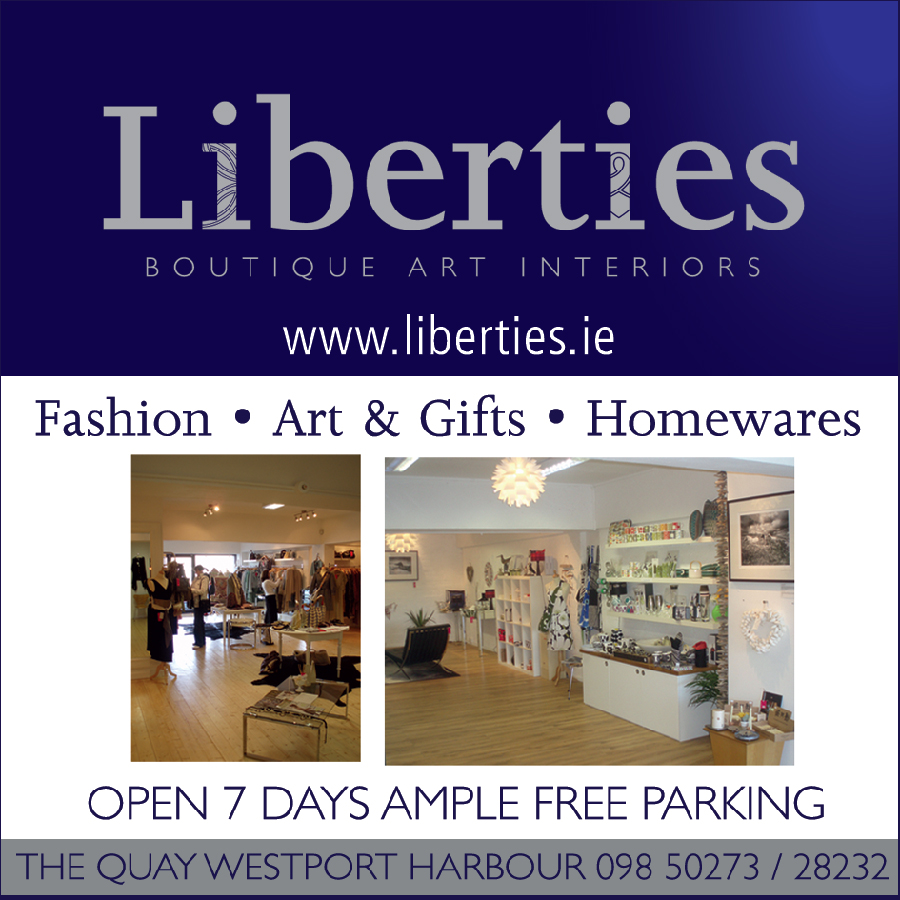 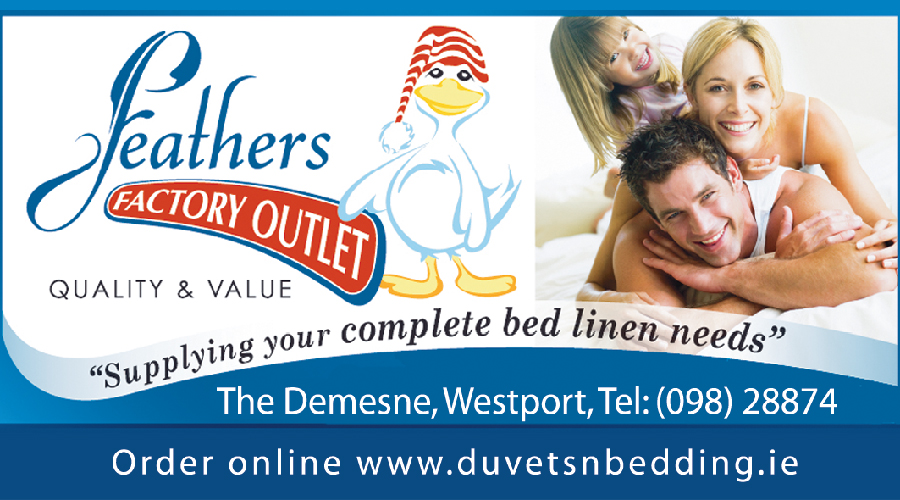 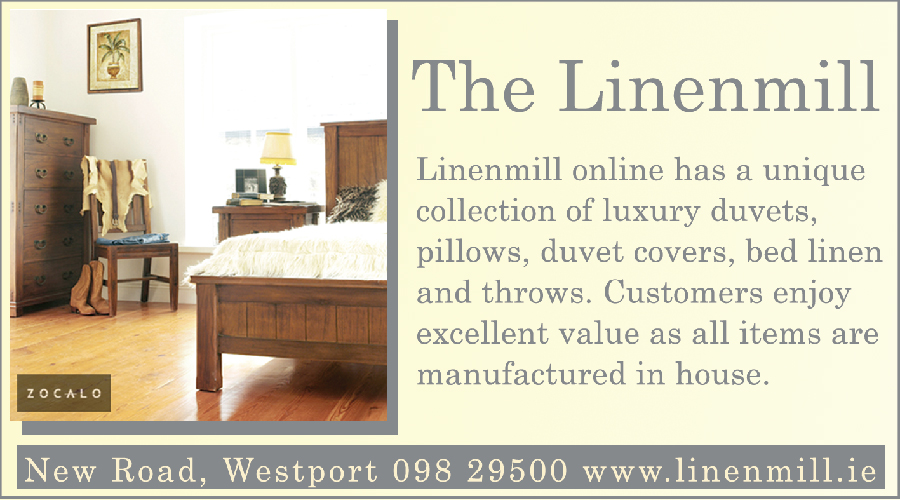 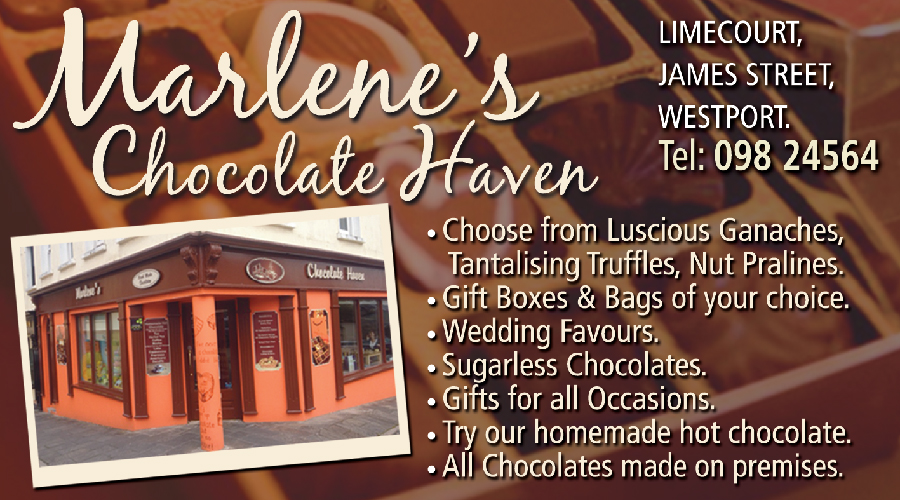 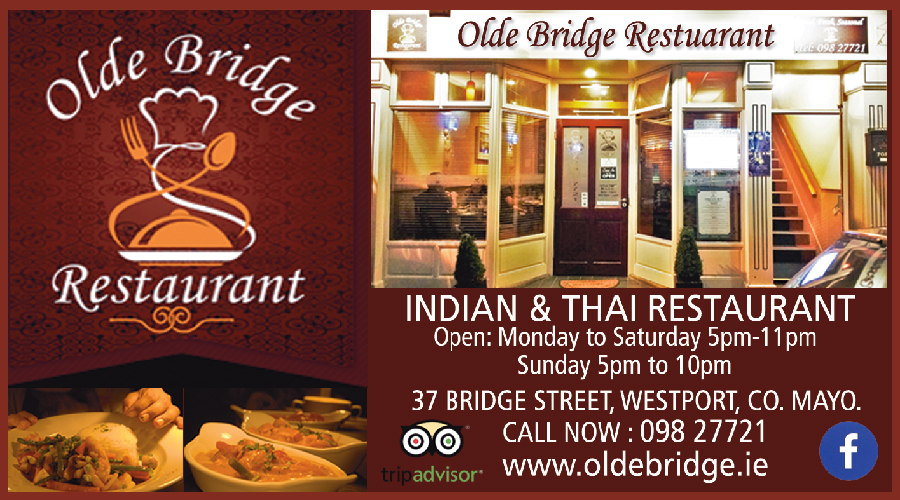 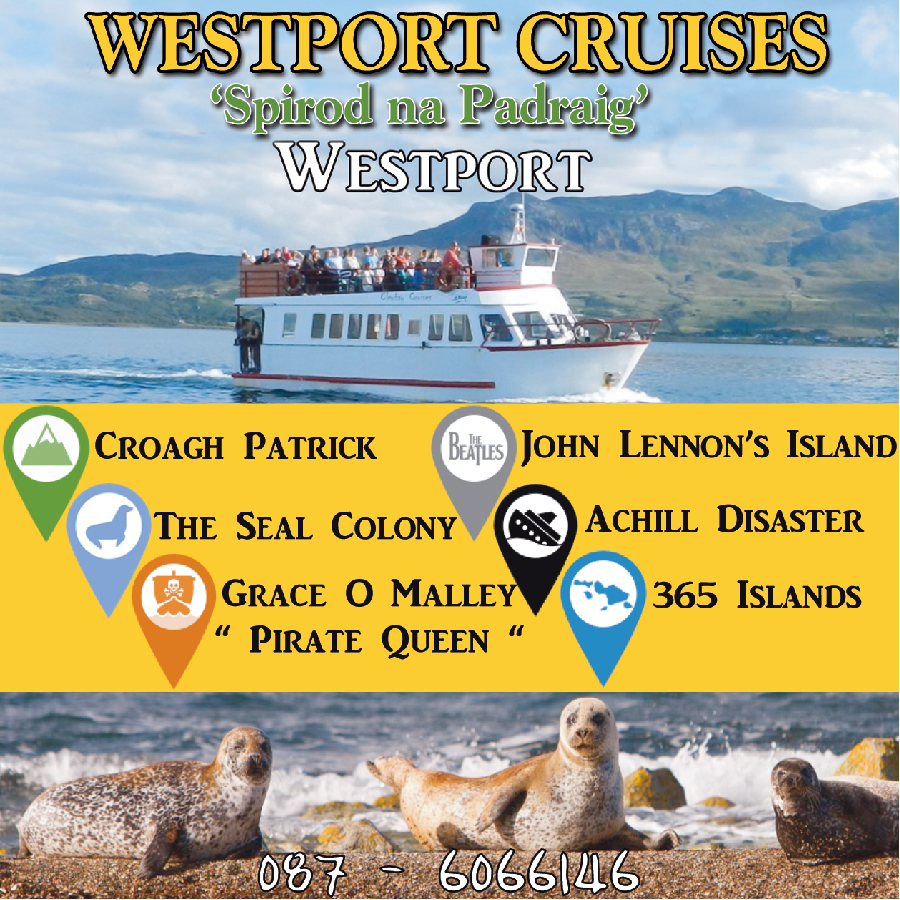 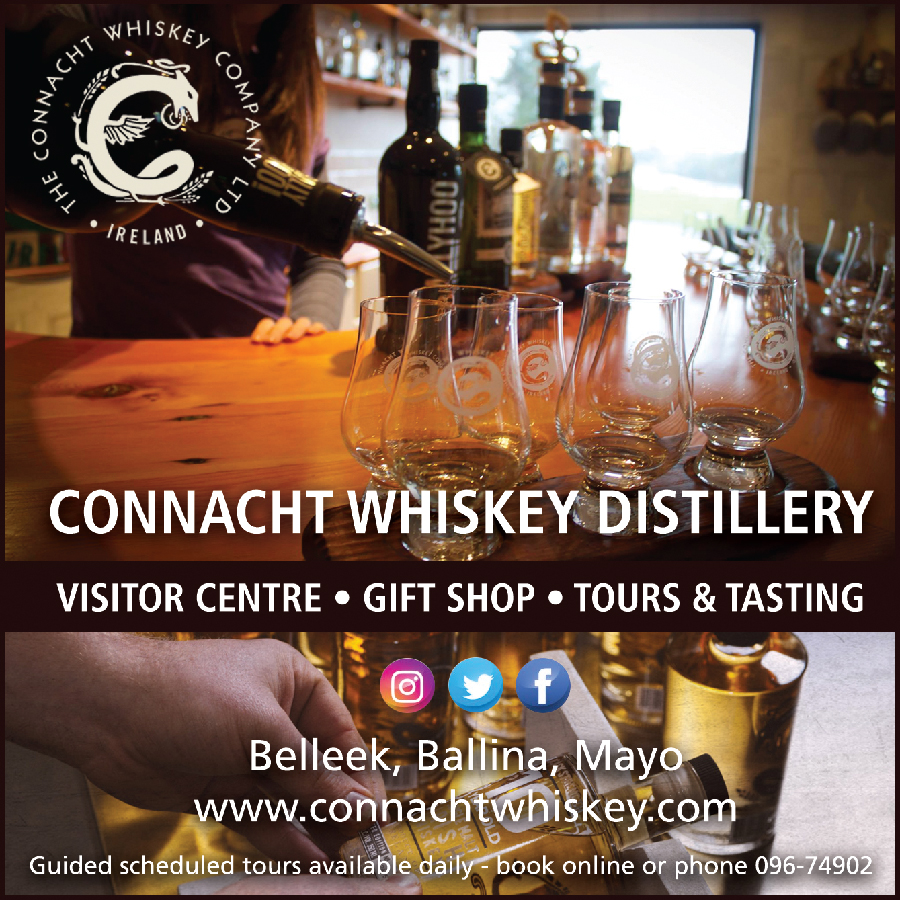 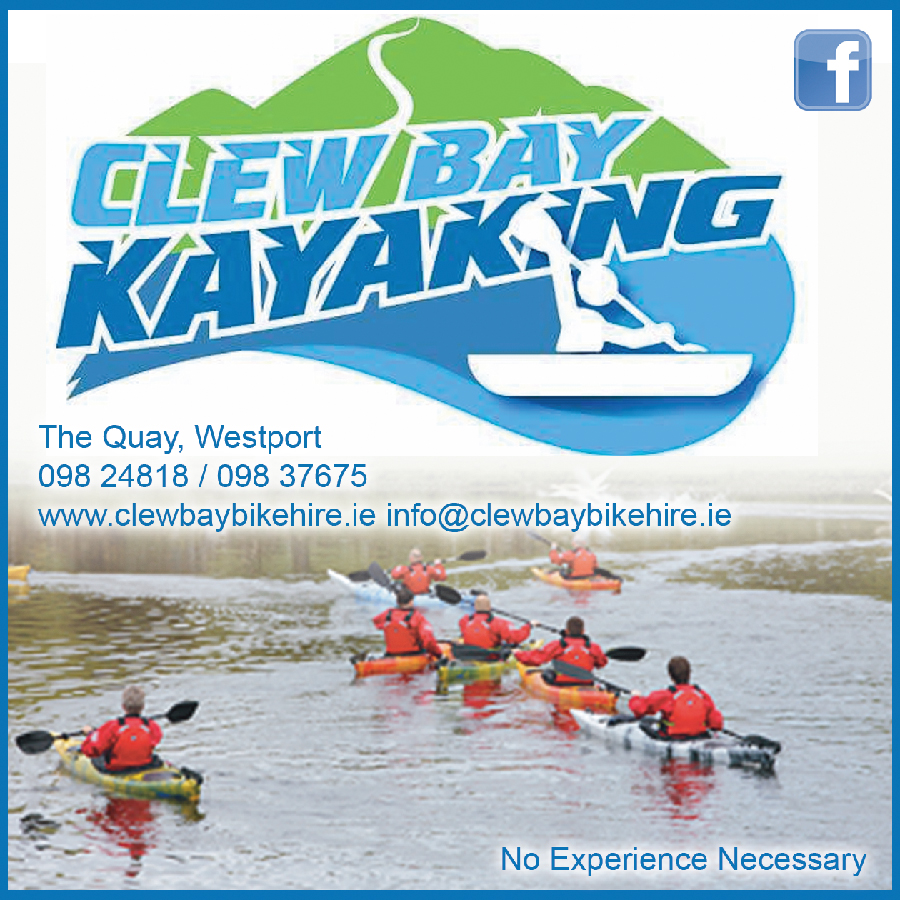 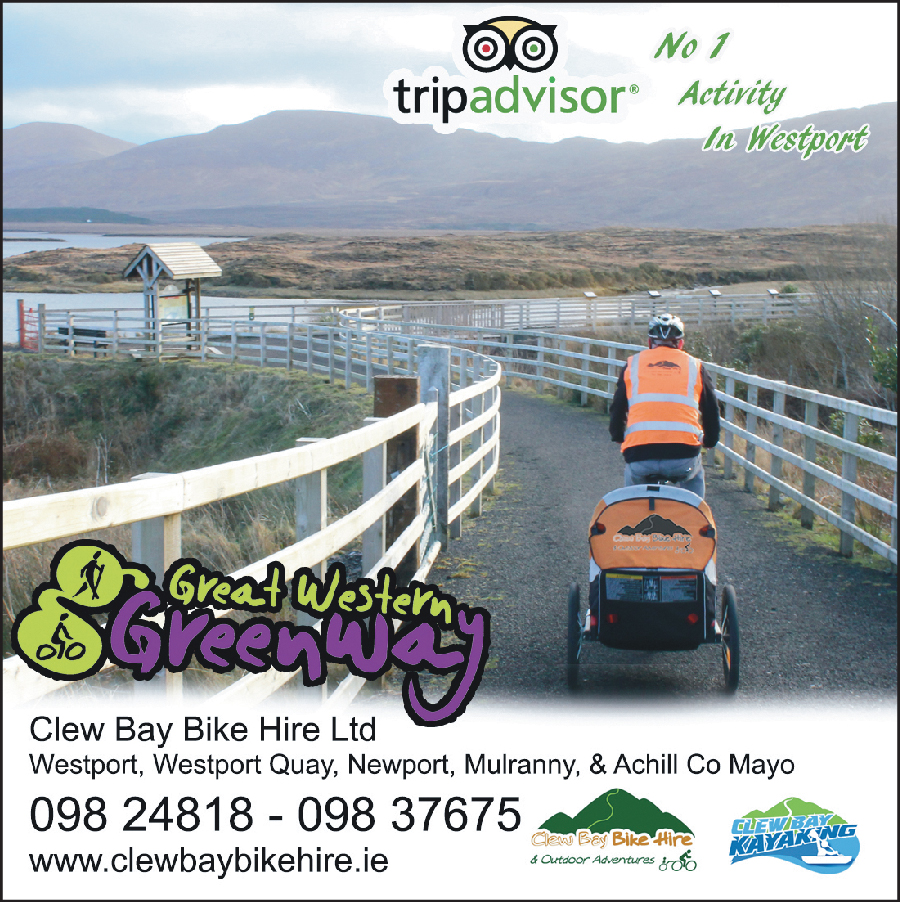 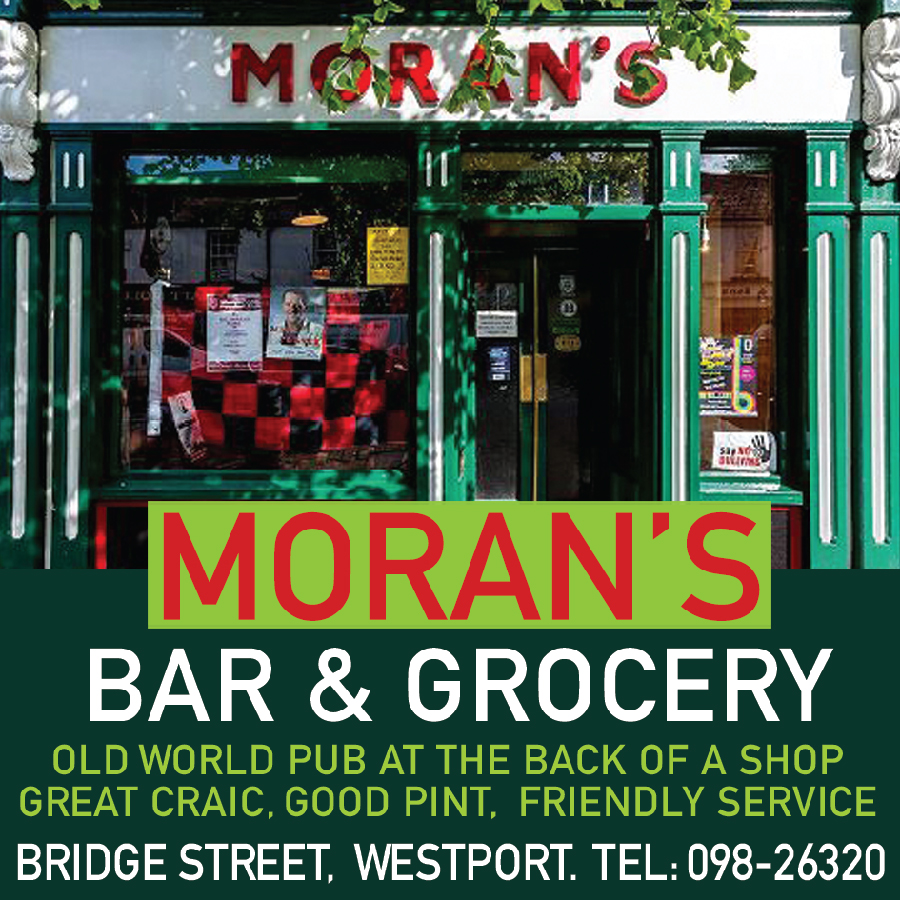 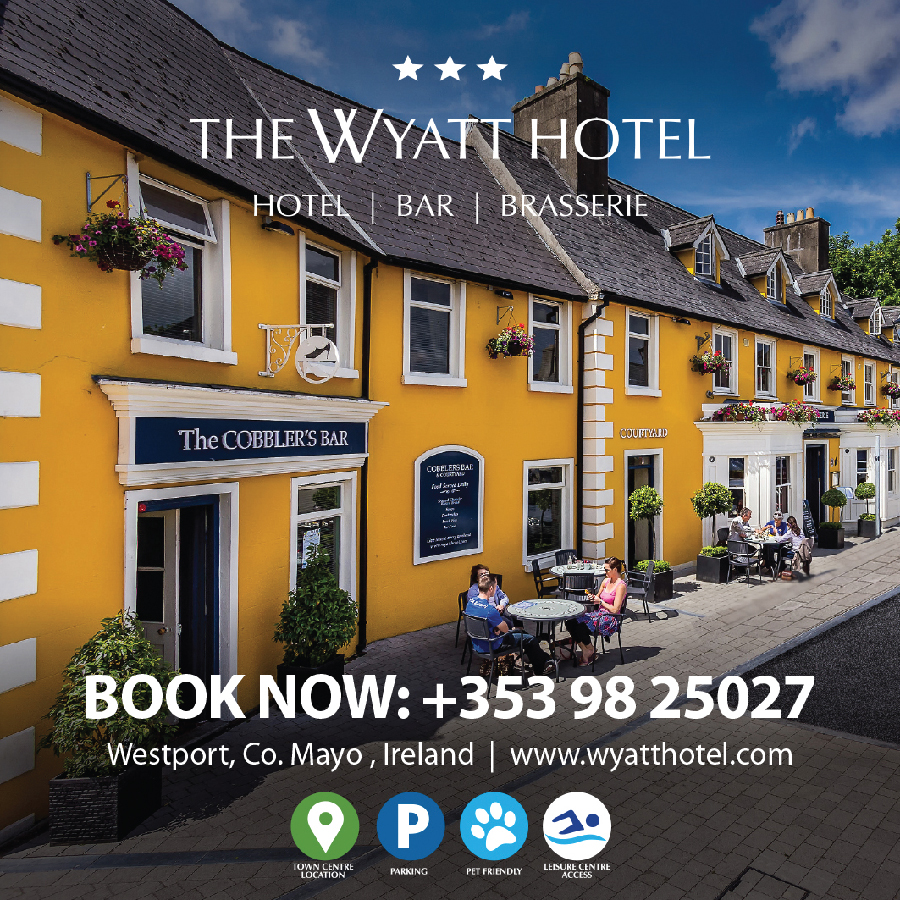 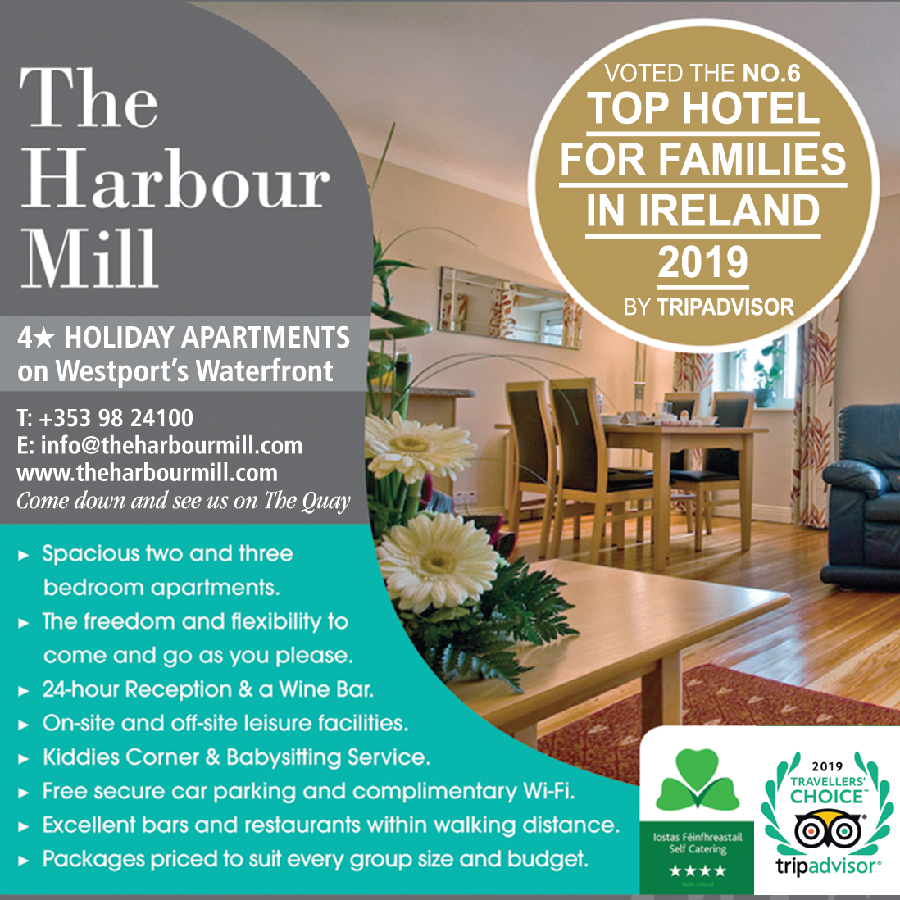 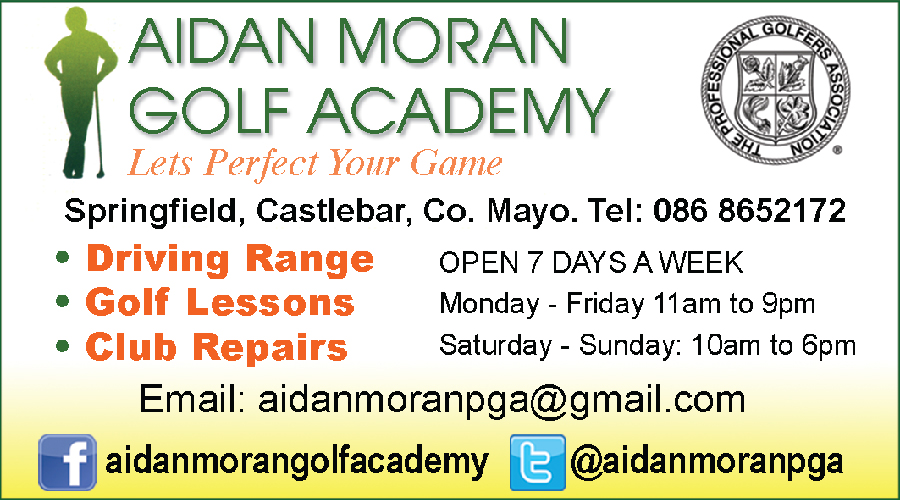 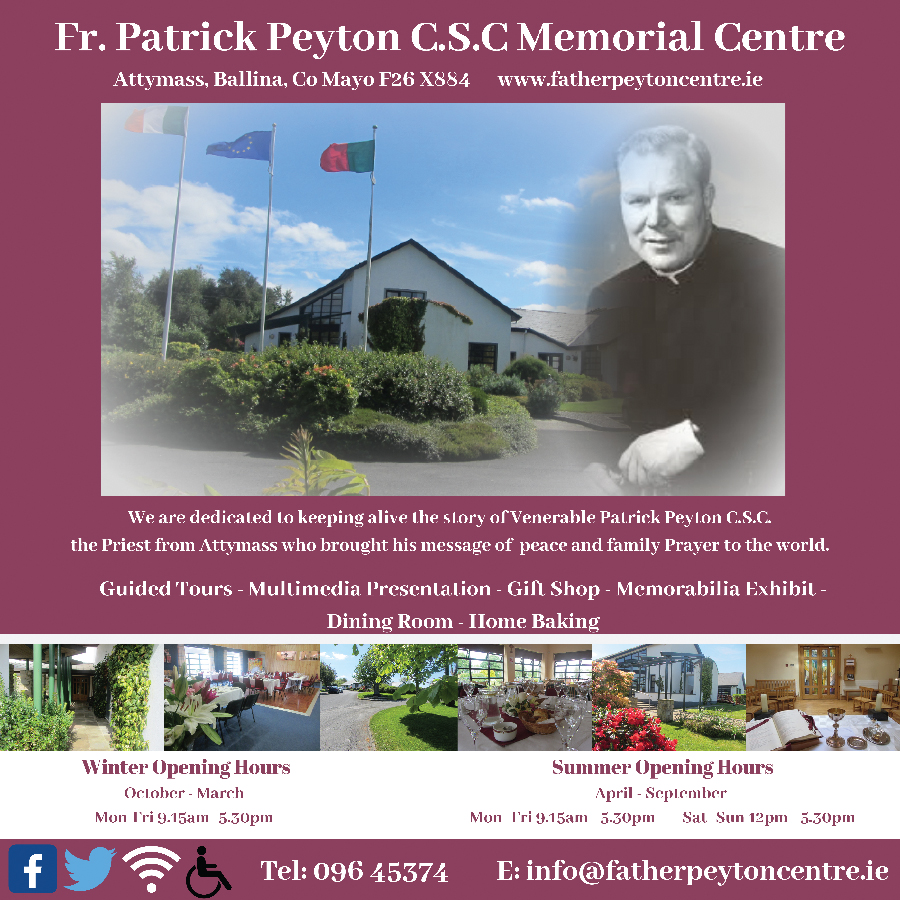 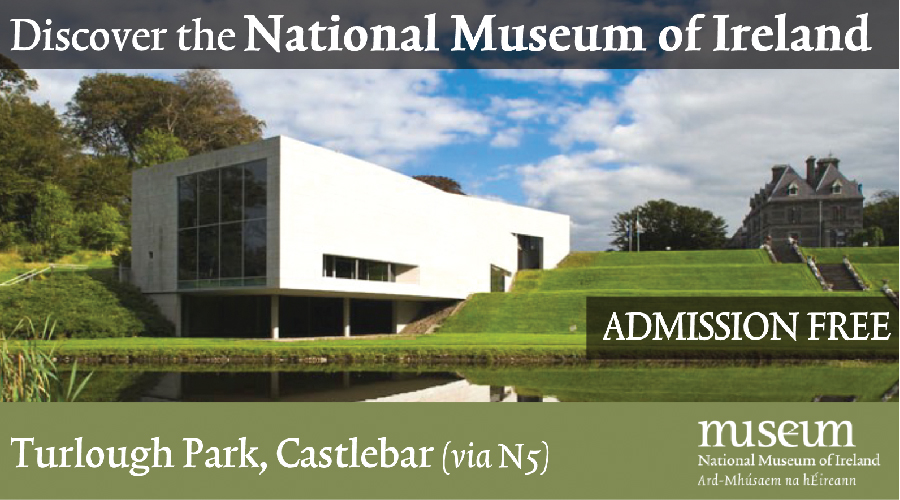 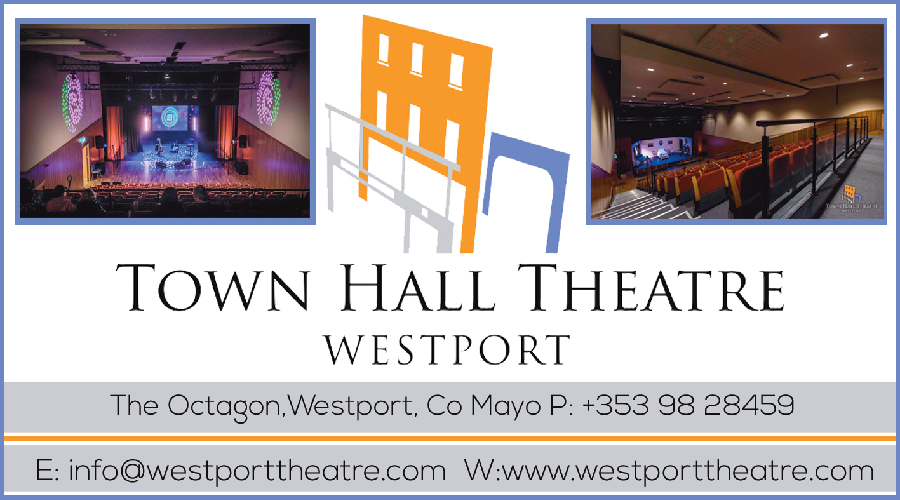 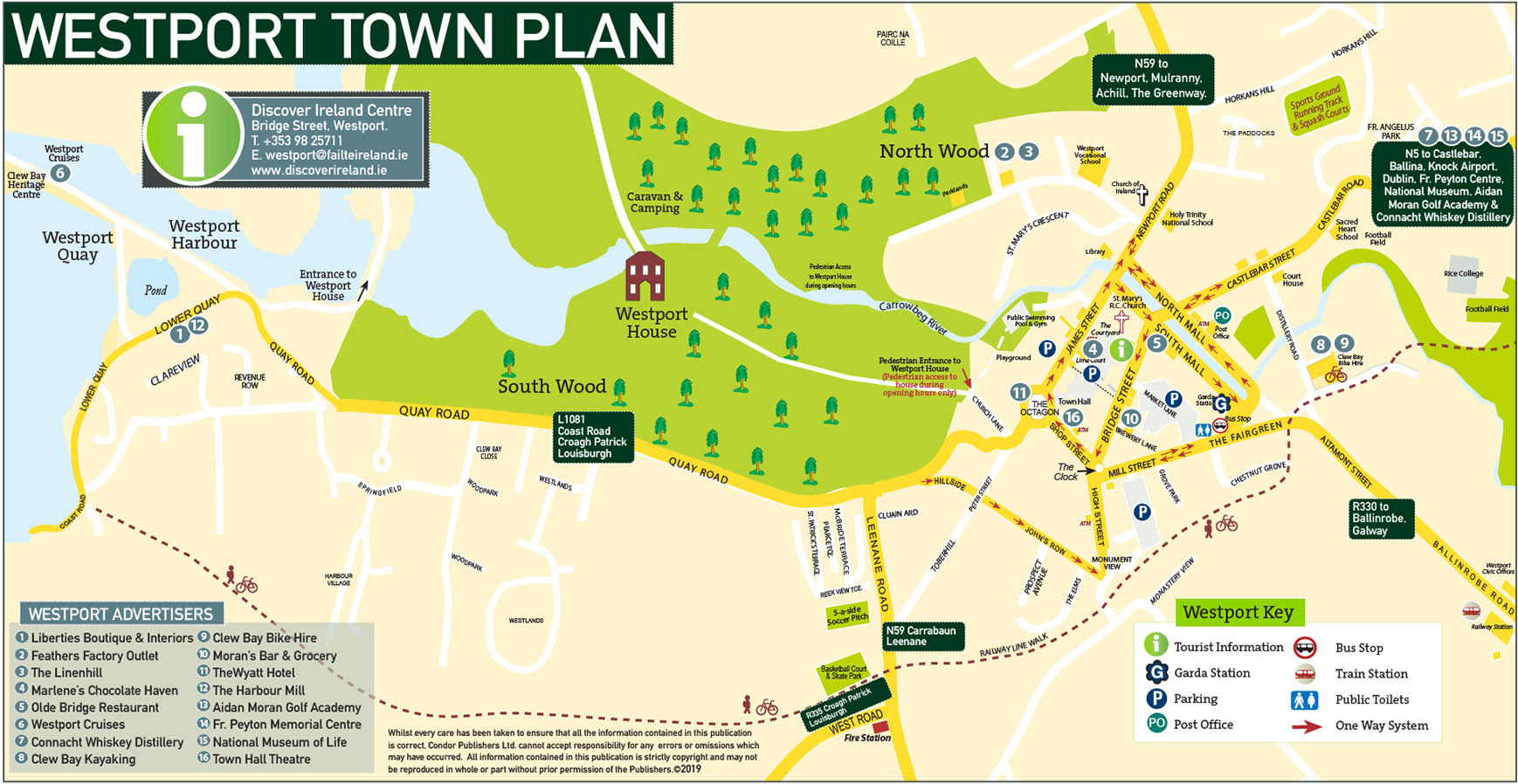 ATTRACTIONS in westport & its SURROUNDING AREAS

A visit to the town is not complete without a stroll along the tree lined boulevard that runs right through the town centre. At Christmas time, the Mall is particularly attractive with the trees lit up, providing a spectacular centre piece at a special time of year.

The Museum and Genealogical Centre is located at Westport Quay, adjacent to the Westport Sea Angling Centre. The building is open all year round.

The house is the most significant historical home in the West of Ireland and is one of the most visited tourist sites in the province. For opening times see www.westporthouse.ie

Westport Town Hall Theatre reopened it’s doors to the public in June 2015. The Hall has undergone a significant redevelopment that has delivered a fully functional, 225-seater, modern equipped theatre. Memorable shows have included stellar performances from local community and professional touring Theatre groups, The Westport Folk and Bluegrass Festival, Neil Delamare, Des Bishop, The Swing Cats, The Willis Clan, The Four of Us, Declan O’Rourke, Mick Flannery, The Westport Festival of Chamber Music, The Westport Arts Festival, Brendan Grace, Johnny McEvoy, The Three Tenors & Jack L, to name but a few. All performing artists and patrons have noted the exceptional quality of the acoustics, along with the facilities available as being second to none. Additionally, the facility welcomes art exhibitions and an array of workshops that run creatively throughout the year. Website: www.westporttheatre.com Phone: 098 28459 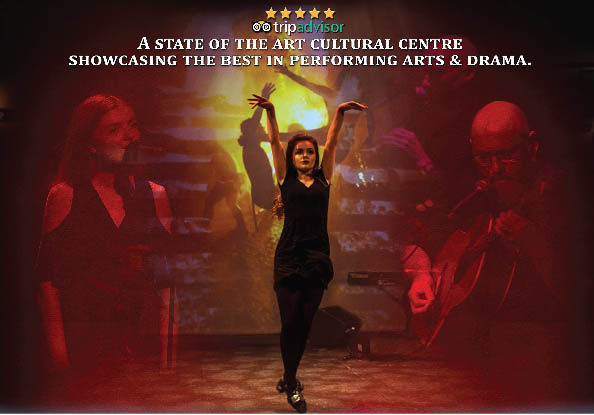 This historical village is 7 km from Westport town. It is home to a national monument, a 12th century Round Tower and a 13th century church along with several Patrician relics.

Founded in 1216 by the King of Connaught, Cathal O’Connor, Ballintubber Abbey is 17km from the town of Westport. Immensely popular as a venue for weddings because of its spectacular setting, the Abbey is also the starting point for the Tochar Phadraig, the ancient pilgrim’s path which runs from the Abbey right through Aughagower to its finishing point at Croagh Patrick. Guided tours are available by contacting 094-9030018

The mountain provides the most beautiful of backdrops to the town. Legend has it that St Patrick prayed on the mountain for forty days of Lent in 441 AD. Upwards of 30,000 people climb the mountain every July as part of the national pilgrimage.

Most famous as the home of Grainne Uaile, the island has a population of close on two hundred people. Extremely popular as a holiday destination, it can be accessed by ferries that operate from Roonagh Harbour, Louisburgh.

The Wild Atlantic Way stretches for 2,500 km (1,500 miles) along Ireland’s western seaboard, from Malin Head in Co. Donegal down to Kinsale in County Cork. WHEREVER YOU GO ALONG THE WILD ATLANTIC WAY, YOU WILL ENCOUNTER MOMENTS OF MAGIC, MOMENTS TO TREASURE & EXPERIENCES THAT YOU WILL WANT TO RETURN TO AGAIN & AGAIN. 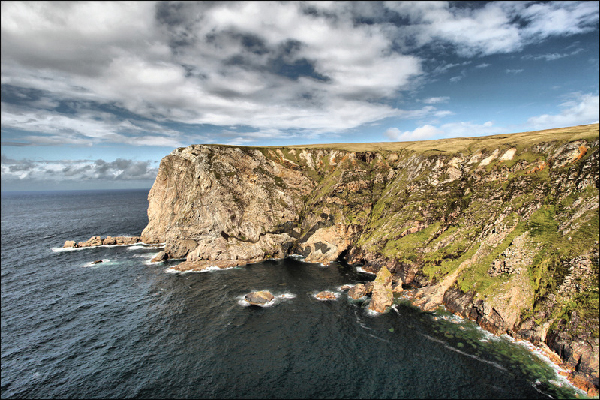 Every year, on April 18 and August 24, the sun appears to roll down north face of Croagh Patrick at dusk – a phenomenon that is best viewed from the Neolithic Rock of Boheh (or Bohea). The rock bears one of the finest examples of Neolithic rock art in Ireland and Britain, and its carved ‘cup and ring’ motifs are the only known such examples west of the Shannon.

Rolling Sun Spectacle, Bohea, Westport – Every year, on April 18 and August 24, the sun appears to roll down north face of Croagh Patrick at dusk – a phenomenon that is best viewed from the Neolithic Rock of Boheh (or Bohea). The rock bears one of the finest examples of Neolithic rock art in Ireland and Britain, and its carved ‘cup and ring’ motifs are the only known such examples west of the Shannon.

Clapper Bridge, West of Louisburgh at Burlehinch, near Killeen, Co Mayo – Thought to date from medieval times and one of the last remaining clapper bridges in the world. Its 37 arches are superbly constructed in the primitive clapper style, each made of a clapper or flat limestone slab resting on a pier of about 0.6 m (2ft) above the river bed.

Achill Island is Irelands’ largest offshore island and connected to the mainland by a bridge over the causeway. The island has glorious cliff scenery, spectacular drives and walks, beautiful beaches and good sea and shore angling. Early Christian, famine and related artifacts make a visit to the island a must for the discerning tourist. Achill in recent years has become a hub for all kinds of water based activities. The island is also part of the Irish speaking Gaeltacht area.

Belmullet in the centre of the Barony of Erris and lying between the two bays of Broadhaven to the north, and Blacksod to the south, it is the ideal place for a sea angling holiday. Nearby to the west is the renowned championship links golf course at Carne. The Mullet Peninsula is an area of natural beauty and charisma and is also famed for the exceptional quality of birdlife found there.

Discovery Points along the way....

SO MUCH TO DO

The Great Western Greenway – Following the old Westport to Achill railway line, this 42km traffic-free route is the longest off-road cycling and walking trail in Ireland. It is ideal for getting out on a leisurely cycle or stretching your legs. Along with take in the fresh country air, you will get to marvel at the spectacular Nephin Mountains to the North and the iconic Croagh Patrick across Clew Bay to the South. Historical sites along the way include the seven-arch bridge over the Black Oak and Bunnahoona rivers, Grace O’Malley’s Rockfleet Castle and a 15th century Dominican Abbey. If you don’t have your own bike then not to worry as there are plenty of options for bike hire in the towns and villages along the route. For those who don’t wish to complete the return leg of the route, then bike hire with a drop-off and collection service is also available. For a more detail information pack on any of the walking and cycling routes throughout the county please visit the Discover Ireland Centre, Bridge Street, Westport. Tel: +353 98 25711

Clew Bay Bike Hire – can provide all the bikes and accessories you need to experience Westport and the Clew Bay Region as well as the off-road 42km Great Western Greenway which runs from Westport to Achill Sound. We also offer a shuttle bus. “So cycle one way and we bring you back”! We have Bike depots located along the Greenway in Westport, Newport, Mulranny and Achill Sound! Westport. T: +353(0)9837675 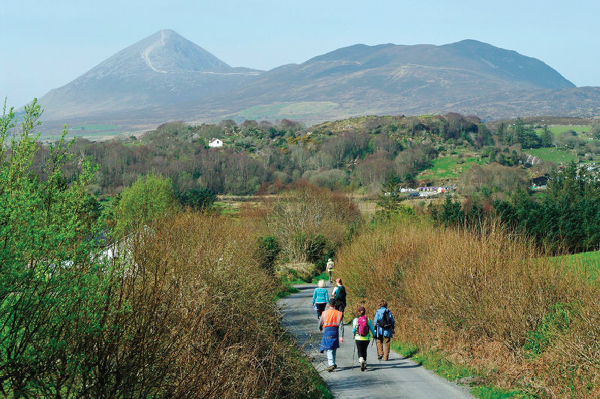 The Western Way (Mayo) – Long Distance Way Marked Ways – The route of the Mayo section of the Western Way is a linear 150 km walking route from Leenaun to the village of Ballycastle.

Croagh Patrick Heritage Trail – A 61km linear walking route that extends from the village of Balla to the village of Murrisk. The route follows parts of an old pilgrim route as it wanders through the rural landscape of west Mayo.

Woodland Walks – Tourmakeady Loop is a great walk for all the family, it’s relatively easy and the bonus has to be the waterfall. Cong Loope Walks give an excellent view over the village. Other excellent woodland walks in Co. Mayo include Brackloon (near Westport) and Letterkeen (near Newport). Rehin Woods Walks – A series of newly developed forest walks on an 81 acre site located approx. 4km outside Castlebar Town on the Newport Road. 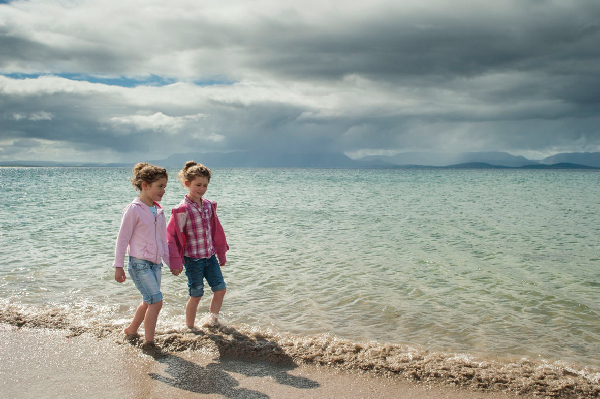 Golf is often a way of life here in the West. A diverse range of links and parkland courses reflect all the great traditions of the game. The main season runs from April to October, but the exhilaration of winter sun is a special experience.

The West’s beautiful scenery lends itself so well to horse riding, so why not get out there and experience it for yourself on horseback!

Pristine waters, a wealth of fish and thousands of kilometres of coastline, riverbank and lakeshore, it’s a dream holiday for devotees of rod and line! The West is home to some of the finest game, coarse and sea angling the country has to offer.

The rugged scenery, crystal clear waters and winds sweeping off the wild Atlantic Ocean, make this are perfect for lovers of the outdoors and adventure of all kinds.  Whether you’re a fair weather adventurer or dedicated adrenaline junkie you’ll have a great choice of outdoor pursuits on your doorstep. Boating, scubadiving, surfing and wind surfing to name just a few.

From gourmet dining to great value meals, the West of Ireland has many tasty choices for all palates and pockets. We serve up a feast of seafood, with many restaurants having signature dishes based on fresh ‘catch of the day’. Cafés can be found dotted throughout Westport town and the surrounding areas, fill up on freshly-brewed tea or coffee, or treat yourself with freshly baked goodies straight from the oven. Regarded as the culinary capital of Mayo, the restaurants of Westport provide the diner with an experience never to be forgotten. Eating houses are dotted around the town as well as at the Quay; leaving the punter with plenty of choice for dinner or just a casual bite at any time of the day. For a full listing locally visit the Discover Ireland Centre, Bridge Street. Tel. 098 25711

Farmers Market – Experience the atmosphere of our farmers’ markets. Browse and sample the local and organic produce including farmhouse cheeses, salmon, meats and a wide range of organic fruit and vegetables.

Pubs – A visit to any of the town’s numerous pubs is a must for the visitor. The town is home to both traditional and modern hostelries with many of them also serving top quality bar food. 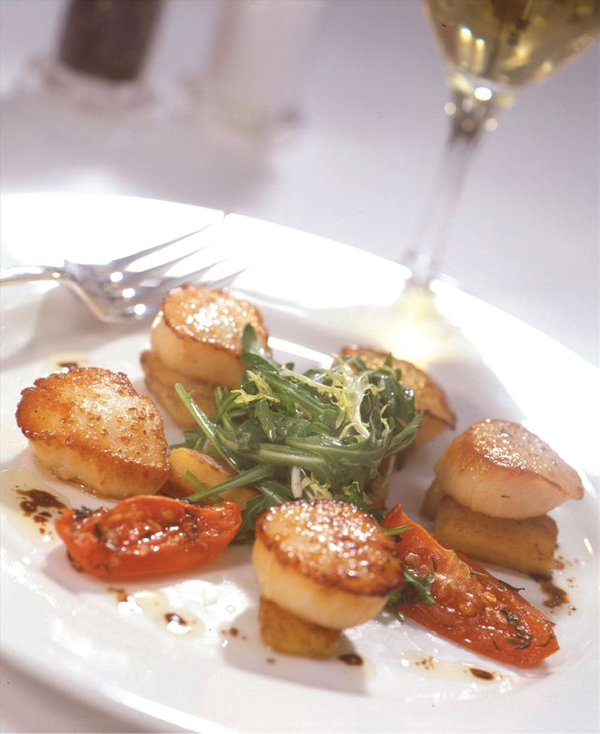 In the West of Ireland having fun comes naturally, there are many EU Blue Flag beaches, fantastic for swimming, exploring rock pools and all varieties of beach activities. There are also numerous leisure centres, visitor attractions and outdoor activity hubs that are worth exploring.