Ballina (Béal an Átha or Béal Átha an Fheadha), translated as meaning the ‘Mouth of the Ford’ is known as the Gateway to North Mayo. Located by the N26, it is the largest town in County Mayo with an urban population of up to 15,000 people and an additional 30,000 in the hinterland. Ballina is situated on the estuary of the River Moy. It is also the cathedral town of the Catholic diocese of Killala. 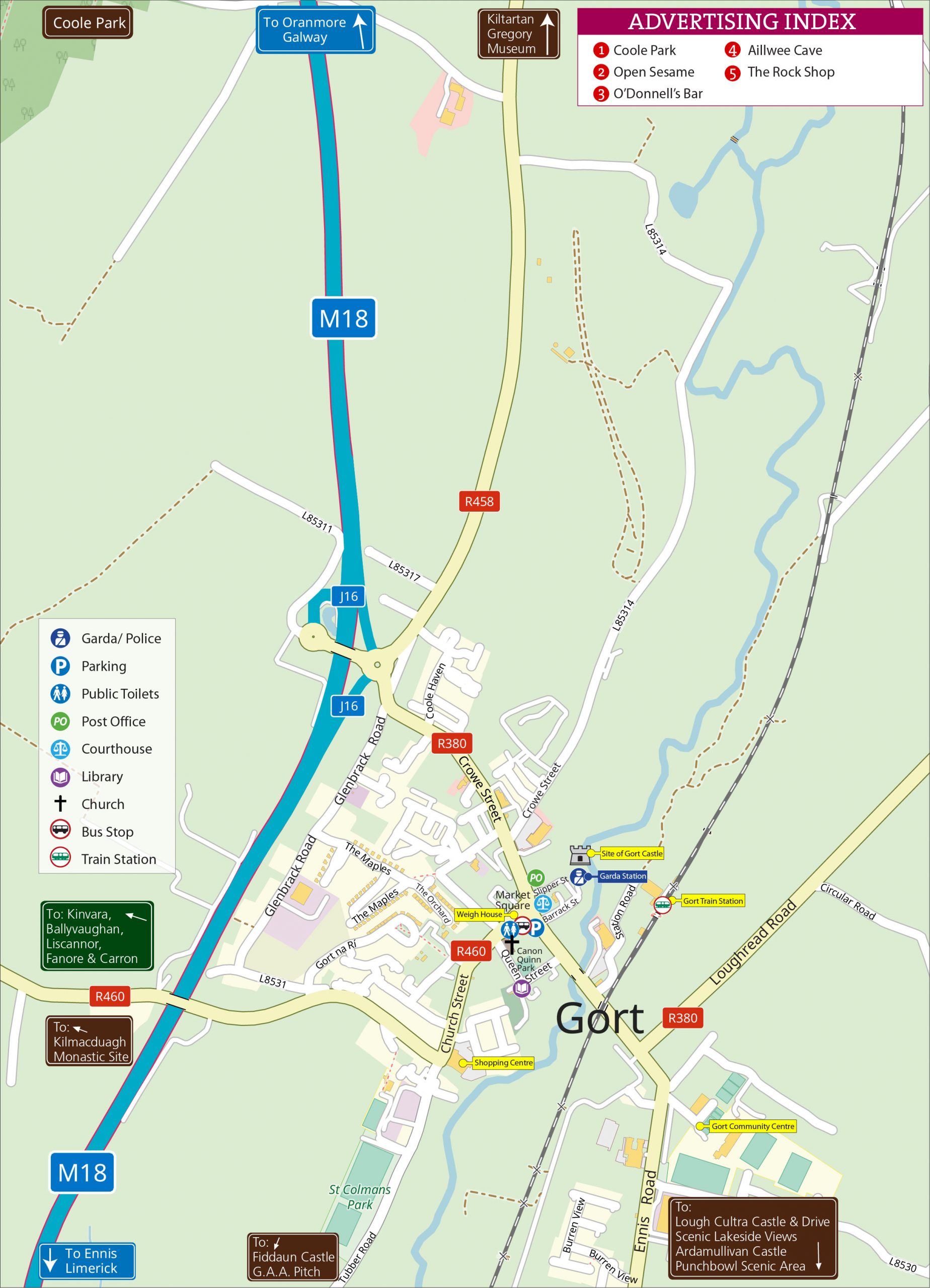 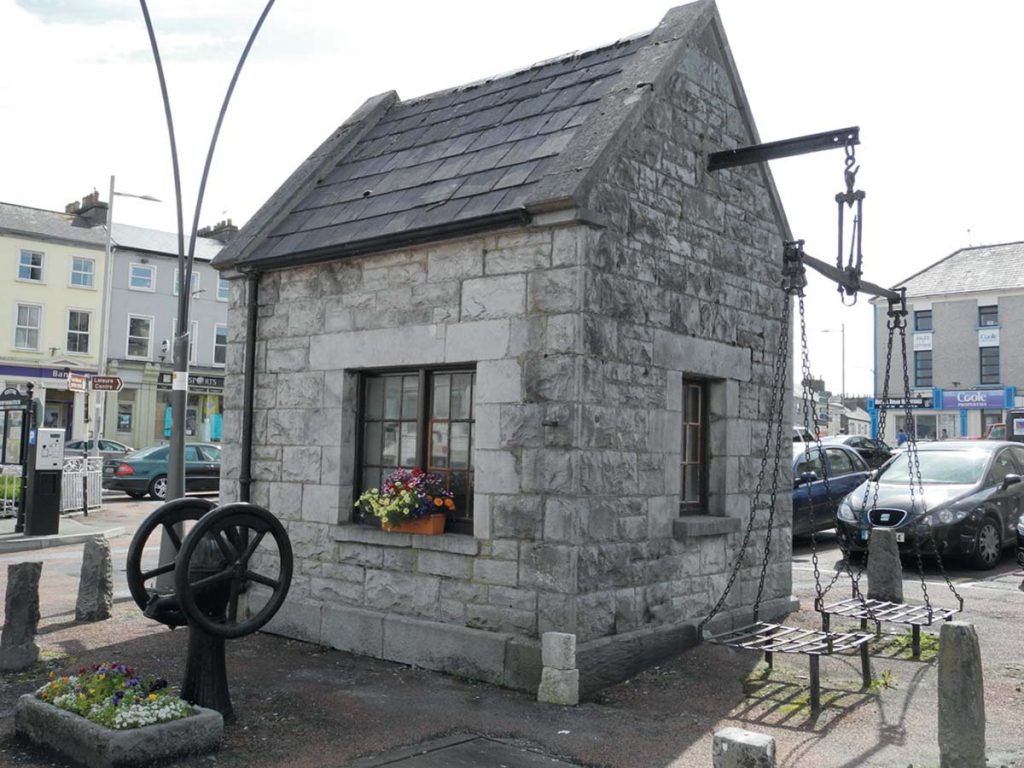 While the town history can be dated back to the 6th century, it is recent history which places Gort high on the list of tourist attractions in Galway. The focus of this attraction is its associations with W.B. Yeats who lived at Thoor Ballylee, Lady Augusta Gregory, who lived at Coole Park (her famous one act play “Spreading the News” was set in the market square in Gort) and Edward Martyn, who lived at Tulira Castle. W.B. Yeats,  G.B. Shaw, Sean O’Casey, J.M. Synge and Lady Gregory launched the Celtic Literary Renaissance.  Gort is still the principal market town in South Galway. It would be hard to imagine an area more rich in physical beauty, archaeological, historical and literary interest, than that of South Galway and the Burren. The picturesque fishing village of Kinvara and the welcoming market town of Gort are the main centres of population whose history have been entwined since King Guaire reigned in the 6th century. The hunting tradition of the Galway Blazers fox hounds who are based in Craughwell and the world famous oyster beds of Clarinbridge and Kilcolgan are also unique features of the area. It is little wonder then that this most southerly pocket of Connaught has been the home and inspiration to world famous writers such as W.B. Yeats, Lady Gregory, Edward Martyn and Raftery, the blind Irish poet.

Things to do & places to visit

The Lady Gregory Yeats Trail incorporates historical sites between the towns of Gort and Loughrea associated with Lady Gregory and W.B.Yeats. These sites include Kilmacduagh, Coole Park, Kiltartan Gregory Museum, Thoor Ballylee, Killinane Graveyard, Roxborough Gates, Woodville Walled Gardens and St. Brendan’s Cathedral. The unique landscape of South Galway and its people inspired both Lady Gregory and W.B. Yeats to create some of their greatest works. Writers, poets, historians, artists and musicians have long been attracted to the area. We invite you to follow in the footsteps of Lady Gregory and W.B. Yeats along this trail.  www.ladygregoryyeatstrail.com

Situated at the renowned Kiltartan Cross, immortalised by Yeats in the lines ‘My country is Kiltartan Cross, My countrymen Kiltartan’s poor,  Kiltartan Gregory Museum is housed in a former schoolhouse. This architectural gem was built in 1892 at the behest of Sir William Gregory of Coole Park and designed by Frank Persse, Lady Gregory’s brother.

Now an award winning museum it houses first editions, manuscripts, memorabilia, furniture and artefacts associated with Lady Gregory and Coole House. It provides information on W.B. Yeats, the Abbey Theatre and the writers of the Irish Literary Renaissance. It contains a rich collection of genealogy and local history. Open daily 1st June to 1st September. Sunday afternoons during May and September.Other times by appointment.Contact: 091632346 E: delourdesfahy@gmail.com 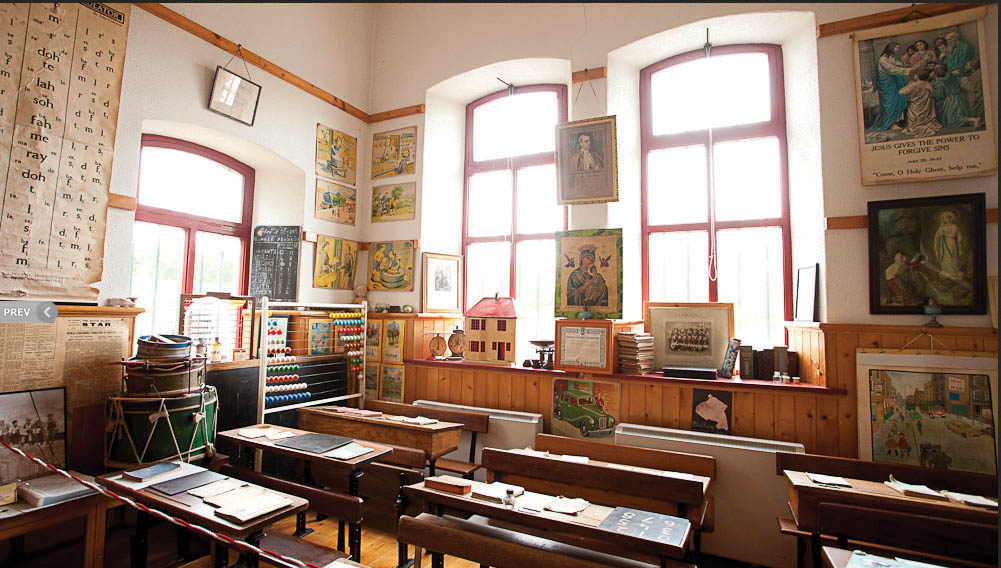 Woodville House is set at the foot of the Slieve Aughty Mountains in South East Galway. The Walled Garden at Woodville consists of 1.5 acres and has been beautifully restored with colorful herbaceous borders, espaliered fruit trees, vegetable garden, rose garden  and serene water – fountain.  Another feature of the garden is a surviving Dovecote which is one of the few remaining “Garden Follies” in the West of Ireland and is now home to a family of white fantail doves. The adjoining Stables of cut stone exhibits the history of Woodville and surrounding locality. Further information Margarita Donohue Tel: 087/9069191.  www.woodvillegarden.com Email: woodvillegardens@gmail.com 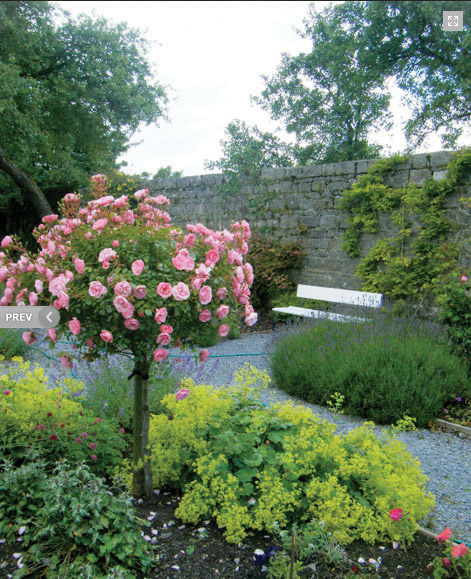 Kinvara (Irish: Cinn Mhara, meaning “head of the sea”), also spelled Kinvarra, is a sea port village located in the south of County Galway. Kinvara is home every year to two festivals, Fleadh na gCuach (“the cuckoo festival”) an Irish music festival at the start of May and the Cruinniú na mBád (“gathering of the boats”) in mid August.

The Kilmacduagh Monastic Site is one of the jewels of the West of Ireland. It exudes peace and tranquillity. Set against the backdrop of the Burren Mountains, this site has the highest Round Tower in Ireland. The Monastic Ruins, often referred to as The Seven Churches.

Round Tower: This is the highest Round Tower in Ireland, being 120 ft. high. It is Ireland’s Pisa as it leans at least two feet from the perpendicular. It  probably dates to the 10th century and tradition says that the builder was the legendary tradesman, the Goban Saor. Cathedral: The oldest part of Teampaill Mor Mac Duagh is the west gable. Later additions were the south transept, Our Lady’s Chapel and the north transept, the O’Shaughnessy Chapel, named after the local ruling family. Glebe House: Seancloch is a large two-storey ,castellated structure standing north of the cathedral. It was the bishop’s or abbot’s house.

O’Hynes Abbey: This is a beautiful 13th century building which stands apart from the other ecclesiastical ruins. 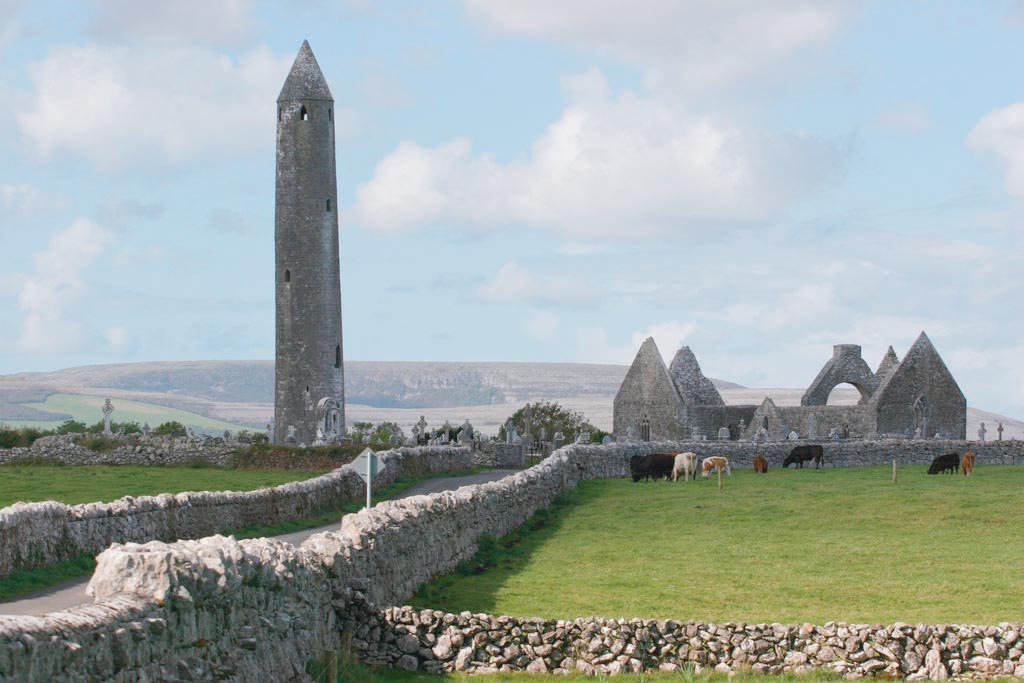 Coole-Garryland Nature Reserve includes 400 hectares of mixed woodland and wetland. Coole Lough is a turlough that is considered to be of global importance as it is the centre of a unique karstic wetland system, including underground rivers and disappearing lakes.

The site has also been described as the centre of the Irish Literary Revival at the beginning of the twentieth century, when it was home to Lady Gregory, co-founder of the Abbey Theatre.  Writers and artists were inspired by the landscape and William Butler Yeats, George Bernard Shaw and many others carved their initials on the Autograph Tree which still stands in the walled garden. 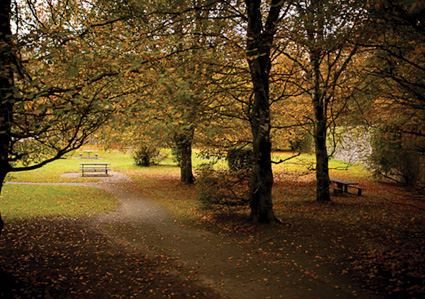 Thoor Ballylee – A 16th Century Fortified Norman castle with a small cottage attached it was acquired by WB Yeats in 1917 for the sum of thirty five pounds. He set about restoring it and renamed it Thoor Ballylee. He lived here with his family from 1921 until 1929. Following his departure from Thoor Ballylee in 1929 the building fell into disrepair and it wasn’t until 1964 when the Kiltartan Society founded by the late Mary Hanley undertook a major restoration project partly funded by  Bord Failte and the Yeats family. It was officially reopened by the poet Padraic Colum on Sunday 20th June 1965 on the centenary of WB Yeat’s birth. Thoor Ballylee was a major tourist attraction in the South Galway until the devastating floods of 1995 and again in 2009/2010 which forced Failte Ireland to close its doors to the public.  The Lady Gregory Yeats Heritage Trail Group formed in 2010 to link the heritage sites between Gort and Loughrea connected with Lady Gregory and WBYeats included Thoor Ballylee as a major site on the trail. The Group hope to persuade Failte Ireland to reopen Thoor Ballylee as it is a very important part of the literary and heritage trail of South Galway. 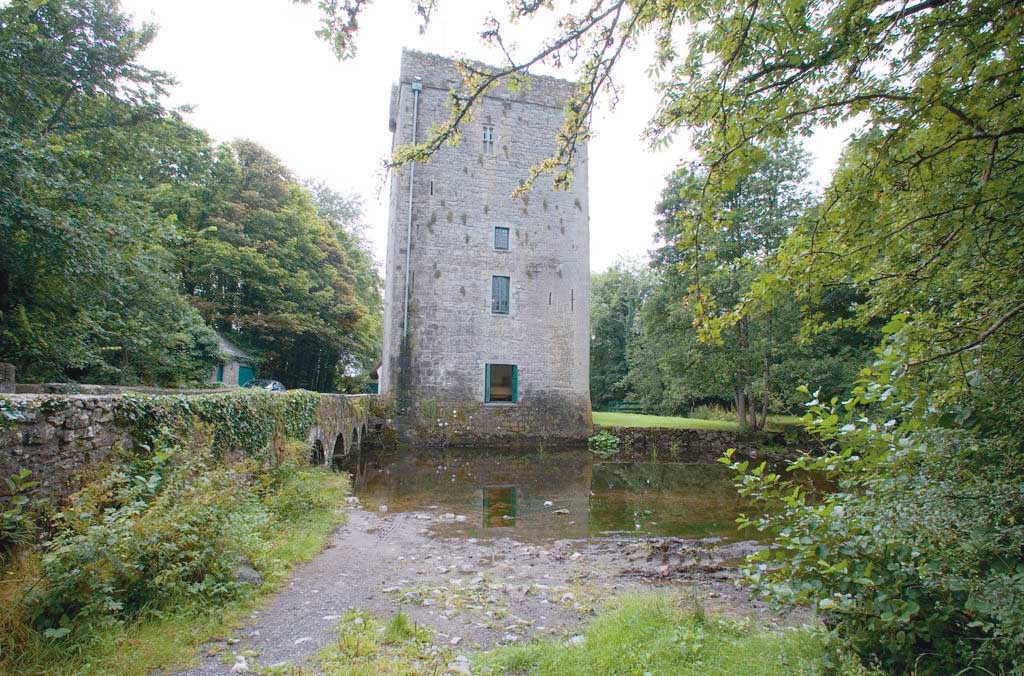 Kiltartan Cross – Situated at historic Kiltartan Cross, made famous by W.B.Yeats, this red brick building is an architectural gem.  It was built  as a schoolhouse in 1892 at the behest of Sir William Gregory and designed by Frank Persse, Lady Gregory’s brother. Now an award winning museum, it houses memorabilia, furniture and manuscripts dealing  with the Gregory family and the Irish Literary Renaissance. It  contains a rich collection of genealogy and local history which has proved invaluable for the Ireland Reaching Out  project and for The Gathering Ireland 2013.  The Kiltartan Gregory Cultural Society was founded in August 1990 with the broad aim of preserving the heritage of the Kiltartan area in South Galway. Contact renamcallen@eircom.net 86  8252164  delourdesfahy@gmailc.om Tel: 083  3171228 / 091 632346.

Dunguaire Castle is probably the most famous land mark that is associated with Kinvara. The castle was built in 1520 by the O’Hynes clan on the picturesque shores of Galway Bay. This restored 16th century tower house sits on a rocky outcrop on the shores of Galway Bay, 300 yards outside the village of Kinvara.  Today, Dunguaire Castle is managed by Shannon Heritage, and is open daily for visitors to explore to visitors from April through to October from 10am – 5pm. (Reservations are not necessary to visit)

Killinane Graveyard is located in the townland of Castleboy in the parish of Kilchreest, Co Galway. It is accessed via a long  laneway off the N66 approximately 4.5km from the village of Kilchreest.  Although  signposted it is secluded. Come with suitable footwear!  The graveyard  is located within the domain of the Old Roxborough Estate.

Roxborough House was once home to the Persse Family and many family members are interred in the graveyard including Lady Gregory’s family, as well  as local Church of Ireland families thus its inclusion in the  Lady Gregory Yeats Heritage Trail. In 2006  Kilchreest Castledaly Heritage Group, after receiving  funding from the Heritage Council and from Galway Co Council commissioned Moore Archaelogical & Environmental Services to survey the site.  With the permission of the Church Representative Body they then undertook the clean up of the graveyard which was hidden from view by brambles, briars, bushes and heavy undergrowth. It had become totally overgrown and neglected over the years.