Clifden is the capital of Connemara and was founded by John D’Arcy in 1812. A monument to the memory of the town’s founder stands on a hill to the west of the town and affords a beautiful view of the bay and the two church spires. Clifden castle, now in ruins, was the home of John D’Arcy. It is situated on Sky road. 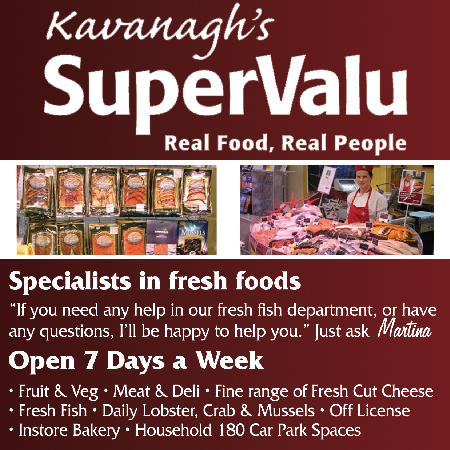 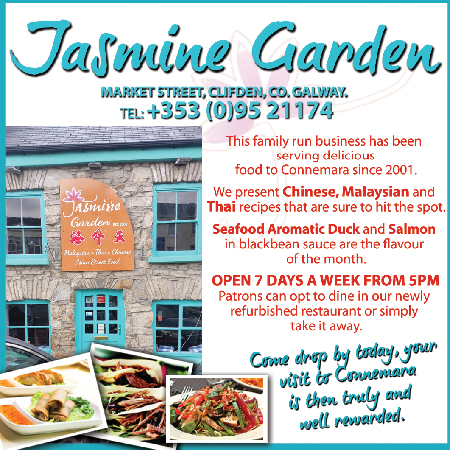 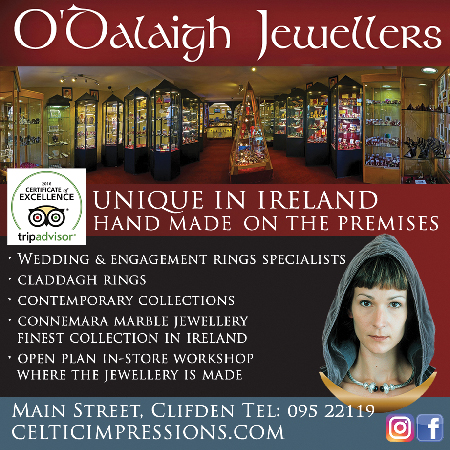 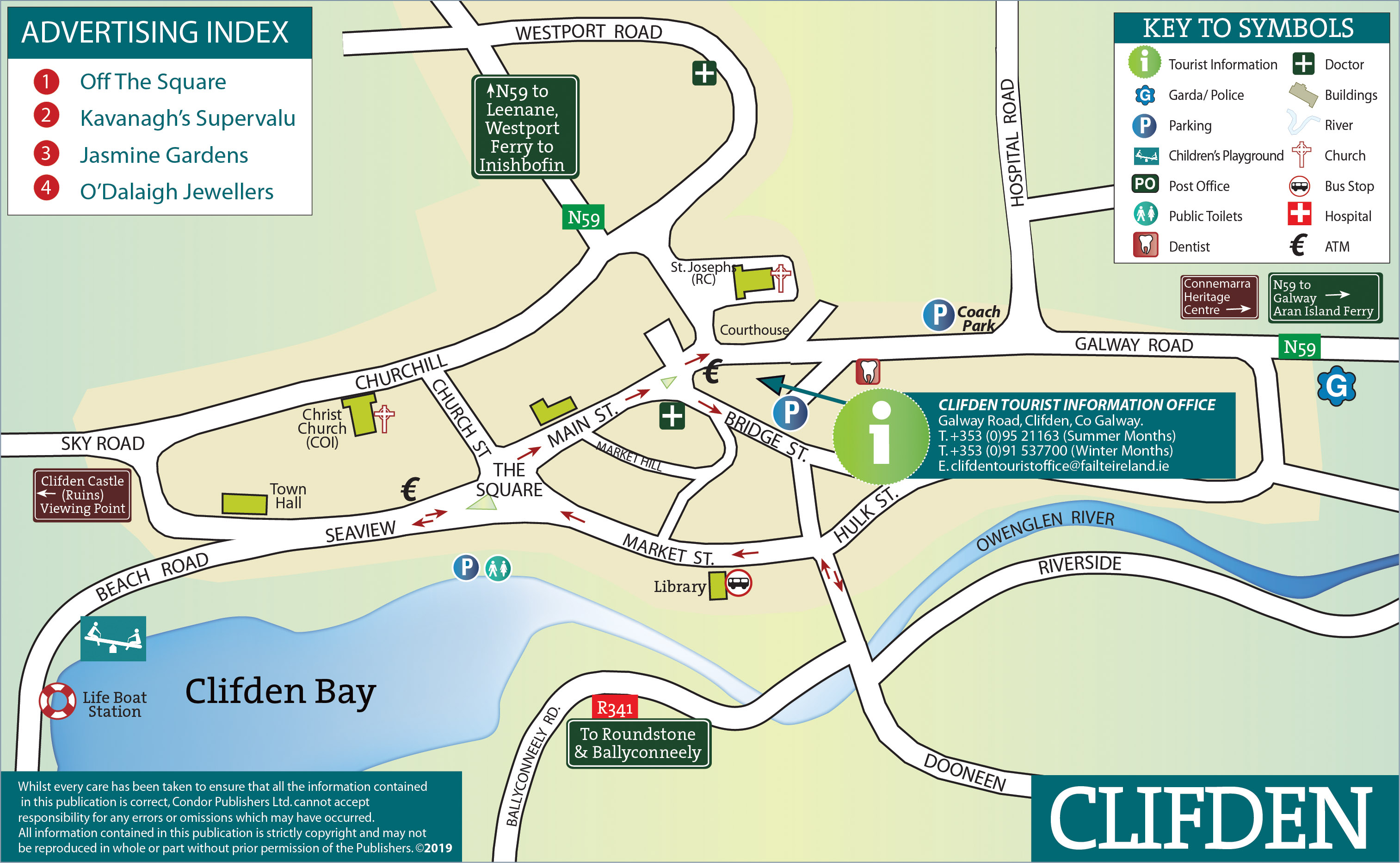 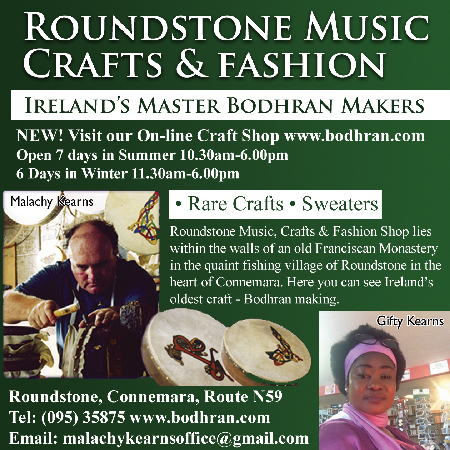 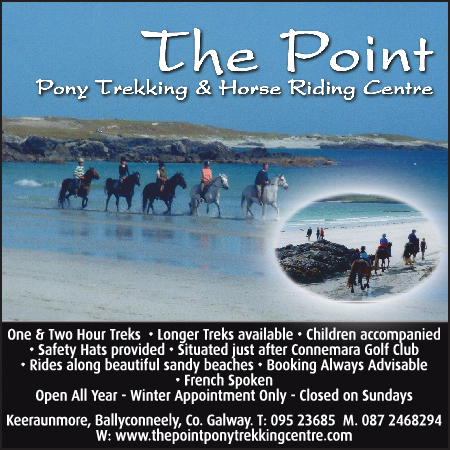 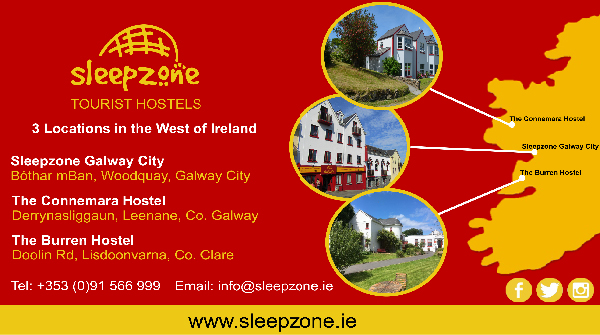 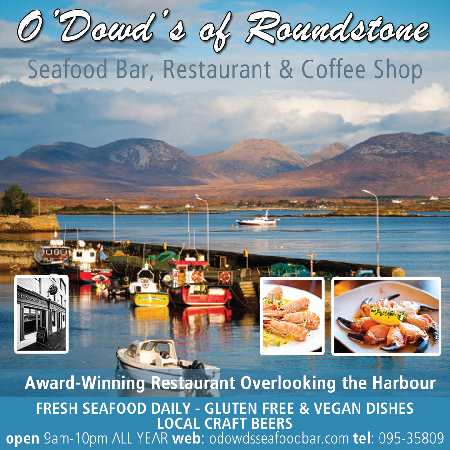 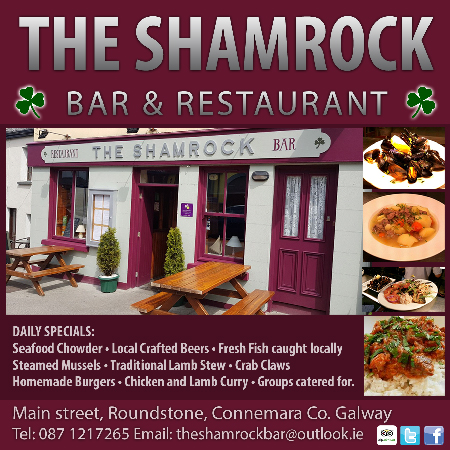 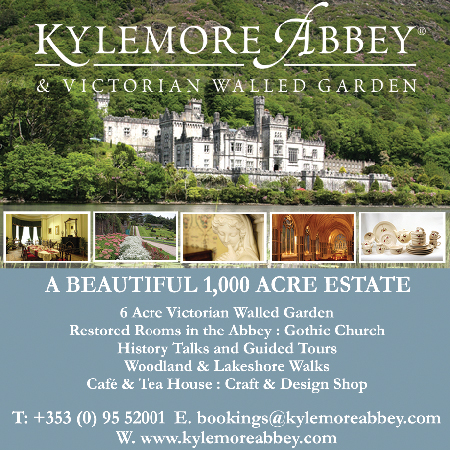 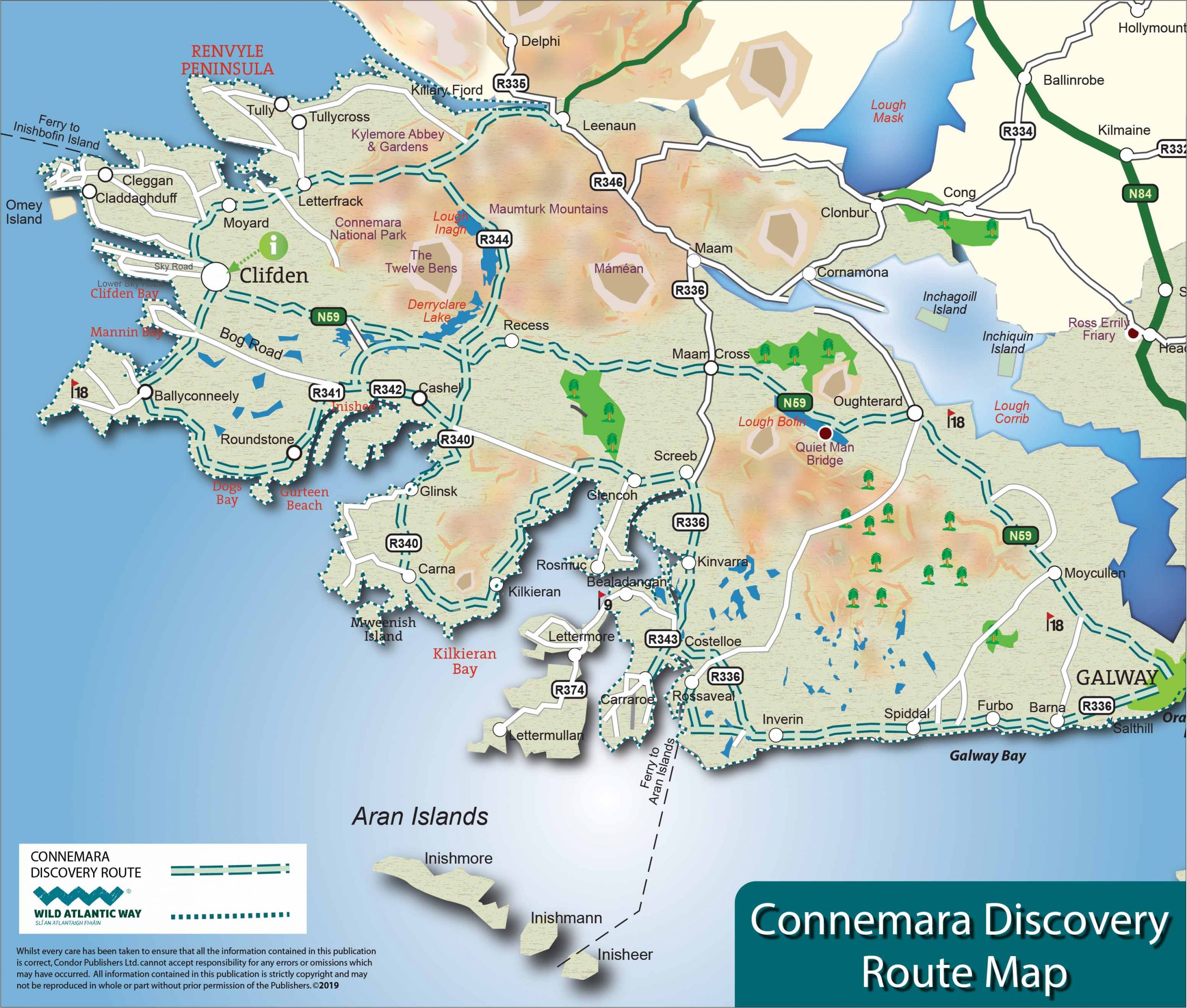 Off the Roundstone road lies the ruins of Marconi’s wireless station which exchanged the first transatlantic radio messages with Nova Scotia. The first nonstop transatlantic flight by Alcock and Brown in 1919 crash landed near the Marconi station and a monument in the shape of the wing of a plane on the opposite hill celebrates this event. The town itself has many well known restaurants and the evenings can continue with music, song and craic in one of the many bars and pubs. If you want day activities, there is fishing from salmon to deep sea, horse riding, golf, shooting, walking, cycling and sailing clubs all within easy reach of the town. Within the town, shops cater for every taste with delicatessens, bakeries, boutiques, draperies, antique and craft shops all offering the best in choice. Further information can be obtained from Clifden Tourist Office. Tel: Summer 095-21163 Winter 091-537700.

A variety of great festivals take place throughout the year, the Traditional Music Festival Weekend. Connemarathon, Leenane Walking Festival and Renvyle Mussel Festival in Spring, Inishbofin Arts Festival, Connemara Bog Week, many pony shows and regattas throughout the Summer  with the famous Connemara Pony Show in Clifden in August. Clifden Community Arts Festival and Connemara Sea Week as well as Maam Cross Fair are events not to be missed in the Autumn.

Places of Interest around Clifden & Connemara

Connemara stretches from Galway Bay in the south to Killary Harbour in the north taking in the rugged peaks of the Twelve Bens, the gentle waters of Lough Corrib and the wild beauty of Inagh Valley. Connemara is home to some of Ireland’s finest beaches, with wide stretches of pure white sand lapped by the Atlantic Ocean. Picturesque fishing villages like Roundstone and Cleggan as well as many off shore islands including Omey and Inishbofin all add to the charm of this region. From the village of Bearna (Barna) some four miles west of the vibrant city of Gaillimh (Galway) the road to the Conamara (Connemara) Gaeltacht hugs the shoreline of world famous Cuan na Gaillimhe (Galway Bay).  Set between timeless moorlands and the blue Atlantic Ocean, the coast road meanders westward through Na Forbacha (Furbo) to the cheerful Gaeltacht village of An Spidéal (Spiddal) with its craftspeople, Irish music makers, Irish language television and film makers and a host of other creative minds visualising ideas through the Irish language.  Roadside beaches and a sheltered harbour add to An Spidéal (Spiddal’s) appeal as a family holiday place.  From Spiddal Pier there are deep sea fishing and pleasure trips out along the bay or around the stunning beauty of the Aran Islands.  Move west again along the road through Indreabhán (Inverin) where a turn to the right or left will introduce the uninitiated to a world of marvelous hillside, bogland or coastal walks. From Inverin, too, Aer Arann flies daily to the three Aran Islands, in just six short minutes flying time.

The Gaeltacht - What is it?

The Gaeltacht is the name given to parts of Ireland where the Irish Language (Gaeilge) can still be heard spoken as an everyday community language. These Irish speaking communities are scattered over seven counties and Galway has one of Ireland’s largest Gaeltacht region. The Gaeltacht regions are located in some of the most beautiful parts of Ireland, renowned for their craggy mountains, wild harsh coast lines and a countryside containing rare flora and fauna. The Galway Gaeltacht offers you the opportunity to experience something truly special – a genuinely warm welcome form the local people, an unspoilt and rugged landscape for removed from the bustle of modern life, and the music of the Irish language all around you.

Journey through spectacular scenery to arrive at Kylemore Abbey & Victorian Walled Gardens, the most romantic castle in Ireland.  When a couple on honeymoon, Dr. Mitchell Henry and his wife Margaret travelled to Connemara in the 1850’s they fell in love with the region. Mitchell returned in the 1860’s and purchased the estate at Kylemore and built a splendid castle as a gift for his beloved wife. The estate was developed from a barren rugged landscape to lush woodland with a wonderful 6 acre Victorian Walled Garden – one of the most beautiful in Ireland and only Walled Garden built in bogland.  Tragically Margaret Mitchell died 4 years after the castle was built. Mitchell built a miniature Gothic Church on the estate in her memory. The church is exquisitely beautiful in its delicate carvings, miniature scale and peaceful setting by the lakeshore.  Home to the Benedictine Nuns since 1920, Kylemore has been renowned as a place of spirituality and education. The Benedictine Community have restored much of the estate to its former glory. Visiting Kylemore you will learn of the tales of tragedy and romance, the engineering initiatives, model farms, and royal visits. Experience the Victorian atmosphere of the restored rooms of the abbey and gothic church. Explore the magical Victorian Walled Garden, lakeside walks an tree-lined avenues. Our craft and design shop stocks the best of Irish fashion, jewellery and gifts, as well as beautiful Kylemore pottery handmade on site. Chocolate, soaps and beauty products made by the Benedictine nuns here at Kylemore are also available. Open all year, 7 days a week. March to June & September to October 9.30am – 6.30pm. 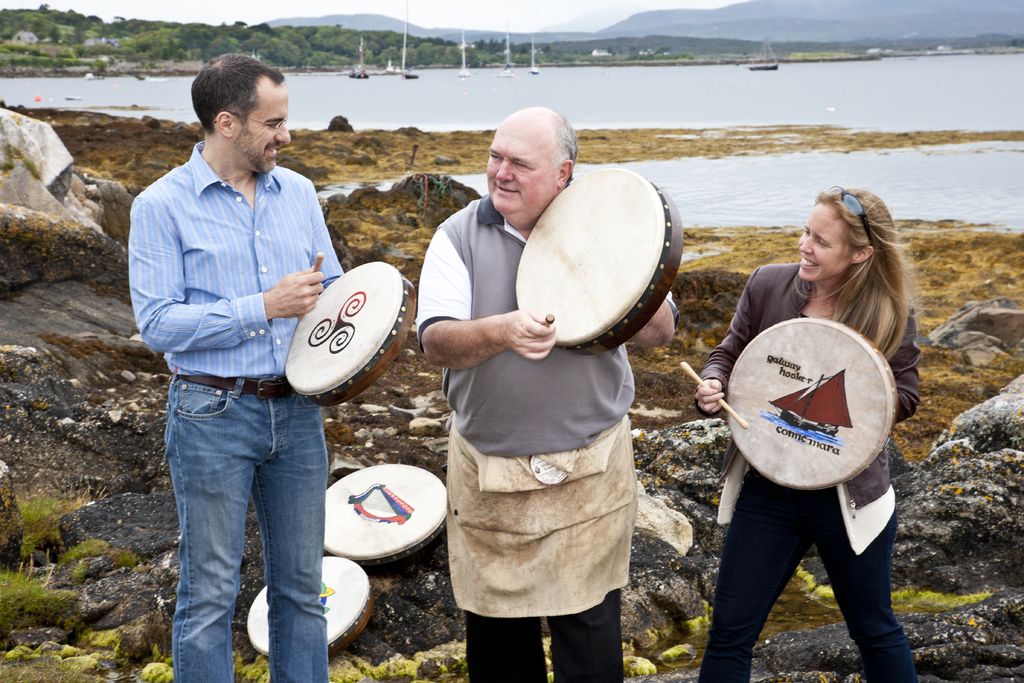 The Pulse of Irish Music – Genuine Goatskin Bodhran, handcrafted with care in Connemara. In an old Franciscan Monastery in Roundstone, developed by the Industrial Development Authority, Malachy Kearns, better known as ‘Malachy Bodhran’ amongst folk musicians, works at his craft at making Ireland’s oldest product – the Bodhran (Bow-Rawn).  It is an 18″ one side drum made from Goatskin treated by traditional process. Goatskin has unique stretch properties.

Malachy, an artist, reads heraldry, and his wife Gifty are respected as fine Bodhran makers for over 42 years.  Most of the professional folk Musicians worldwide use our Bodhran; we are the only full time makers in the world.  The skins are treated in hydrated lime mixed with ingredients that are the closely guarded secret of every Bodhran Maker.  They are soaked for 7-10 days in a solution of lime sulphide which softens the skins, de-hairs it and dissolves the fatty tissue. Sometimes the skin is buried in manure.  It is finally stretched under tension onto a Birch frame.  It is also glued on – this is important for Bodhrans being sent abroad.  It thus cannot “rip off” at the tack – traditionally the weakest part of the Bodhran – when exposed to excess heat.  The skin is stretched tight when new to give room for residual stretch. In the hands of a skilled player the Bodhran can be a subtle and exciting instrument – striking the skin in a variety of ways, one hand tucked in behind the skin, pressing the moving to vary the colour and intensity of the sound.  The side of the beater is also used to good effect on the wooden rim, beater or cipín began as a bone (leg of goat).  Genuine Goatskin is a natural ‘live’ material, expands and contracts slightly with changing temperatures, it has an infinite variety of subtle ‘veining’ and its’ rich lustre becomes more beautiful with age.

A Bodhran is a lifetime purchase – do buy a well made one! Daily talks if pre-booked €8.50pp

Jewellery Making – Discover the secrets of a craft that is thousands of years old.  Wander in and watch Jonathan, one of the skilled members of the O’Dalaigh family, crafting unique jewellery on the premises of the family shop, which is located in the heart of Clifden.  Influenced by the Golden Age of Celtic Jewellery and artefacts thorughout Ireland and Europe, they also produce contemporary organic-like design range.

Things to do & Activities To Enjoy 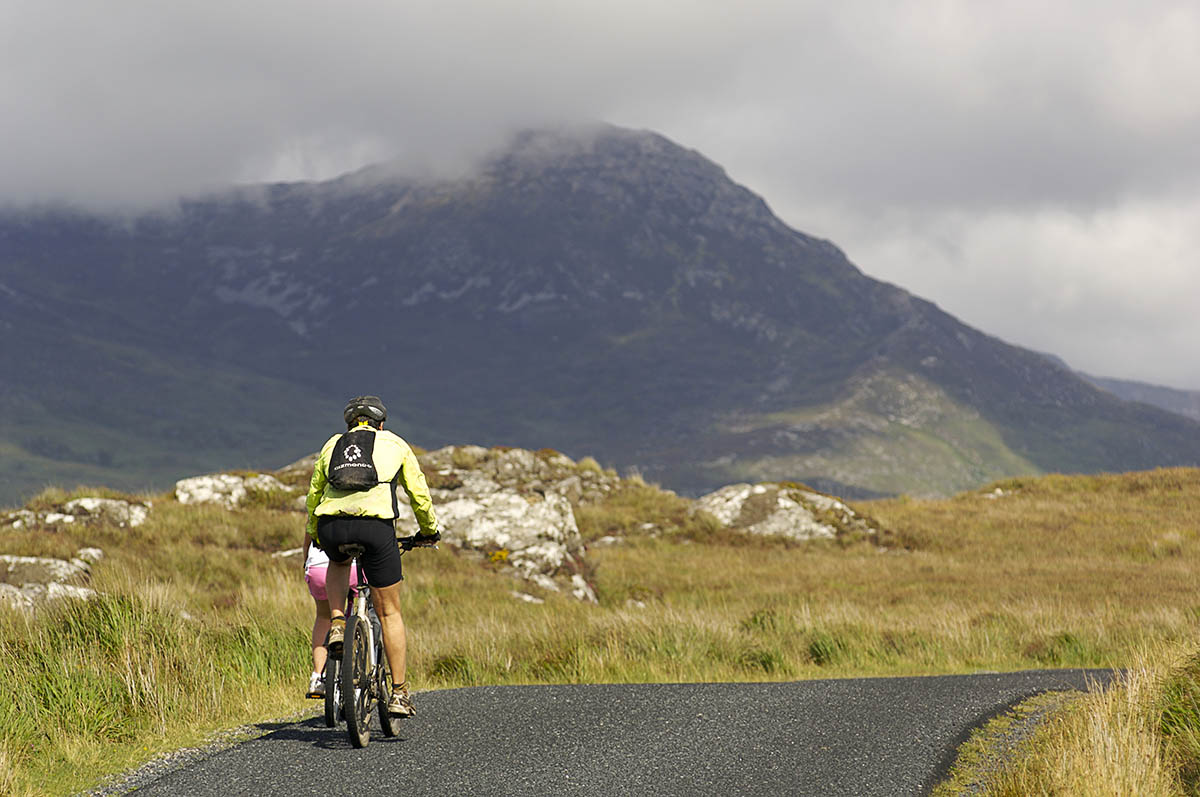 From Clifden you can explore four different Cycling loops which are well signposted and bring you to the pretty fishing villages of Roundstone and Cleggan as well as along the Sky Road and the Errislannan peninsula.

Connemara Golf Links near Ballyconneely welcomes visitors to this beautiful course on the edge of the Atlantic near Slyne Head. There is also a beautifully located golf course on Annaghvane Island , Leitir Mor. For those who like a parkland setting  the course at Oughterard is sure to please. 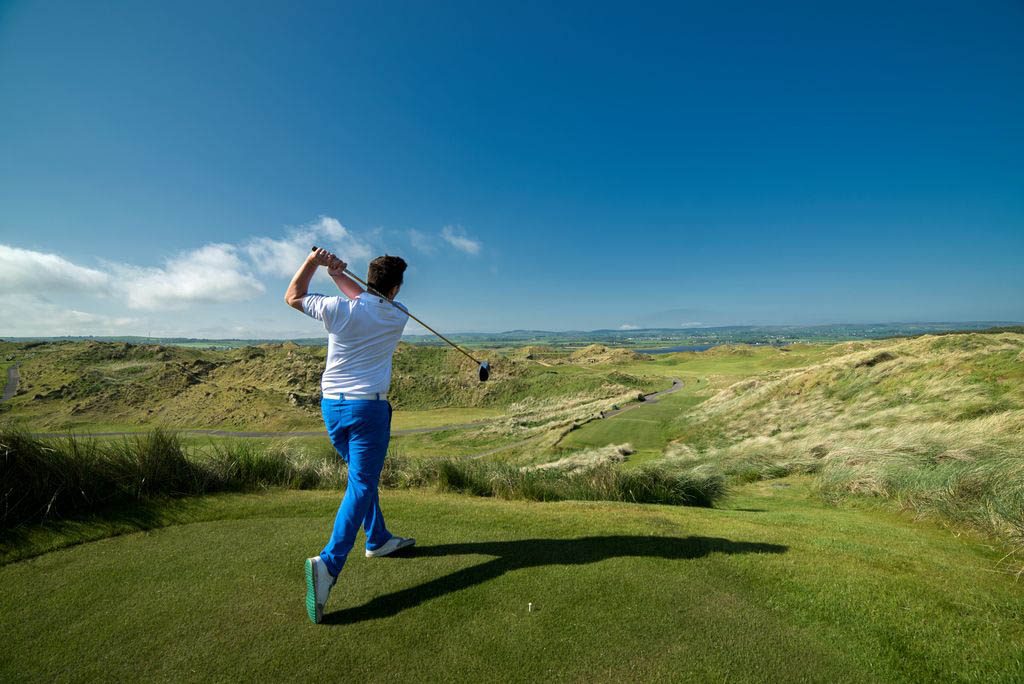 The numerous lakes and rivers of Connemara are a fishermans paradise. As most of these fishing waters are privately owned a permit is required to fish them. Permits and information is available at each of the different fisheries.  Sea fishing boats are available from the different fishing villages around the coast.  Many species of fish can be caught in the waters off Connemara.

The wild unspoilt beauty of Connemara offers a unique walking experience.  Connemara National Park has a variety of trails and for the more energetic the Diamond Hill walk offers a challenge as well as the reward of beautiful views from the summit.  There are many quiet country roads along the coast that can be explored.  The Western Way a waymarked long distance trail starts in Oughterard  and finishes in North Mayo.

For further information see www.irishtrails.ie.  It passes through the Maumturk Mountains and affords the walker a longer trail. The islands of Omey and Inishnee  are pleasant easy walking destinations.  As Omey is a tidal island always check the tide times locally. For the more experienced and seasoned walker The Twelve Bens and Maumturk  Mountains offer a greater challenge.  As this is more remote the hill walker should always have a compass and detailed walking map – Harveys hill walkers map of Connemara or the O.S. map No. 37 – and good walking boots are necessary. 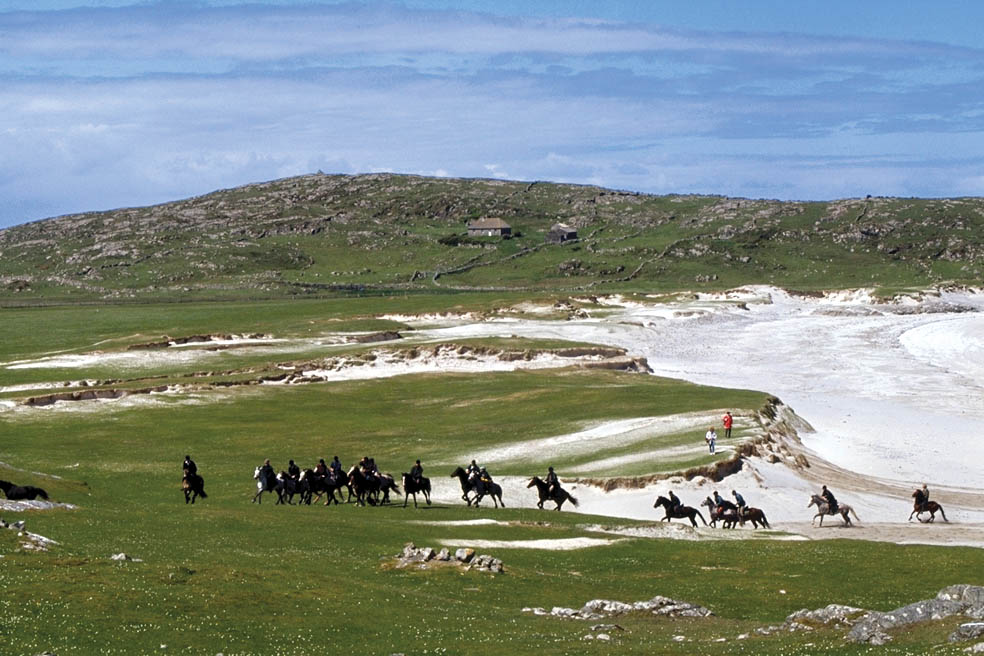 Is a splendid way to see the countryside and there are some establishments in Connemara that offer trekking on the beach as well as through the moors.

The numerous beautiful beaches stretching from Salthill in the south of the region to Renvyle in the north offer clean and safe swimming. Special mention has to be given to Dogís Bay and Gurteen near Roundstone and Glassilaun beach on the Renvyle Pensinula.