Castlebar is named after a Norman adventurer called De Barra who founded a castle there (Castle Barry) in 1235 and Castlebar is historically regarded as a Garrison town. It is a vibrant commercial town with businesses covering a vast spectrum of services and products. New commercial zones have been developed by the local authorities to cater for the increasing numbers of businesses wishing to locate in the town, while there has been a very significant regeneration of the town’s Main Street. Famous people born in the town include Lord Lucan and the world renowned soprano, Margaret Burke Sheridan. 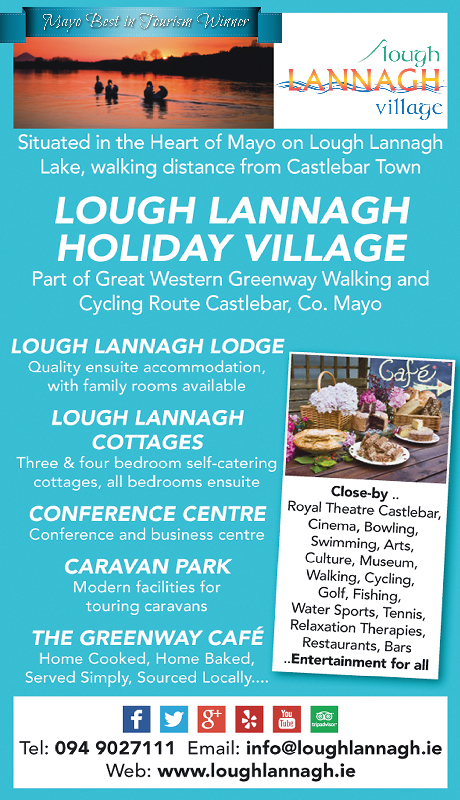 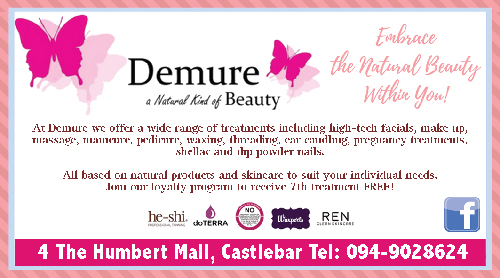 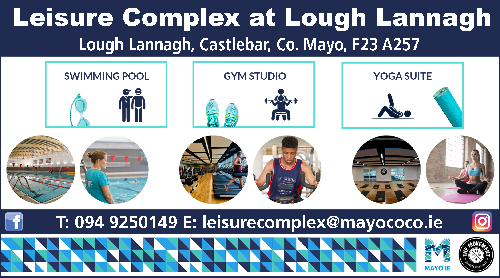 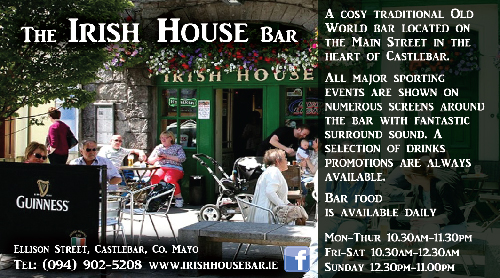 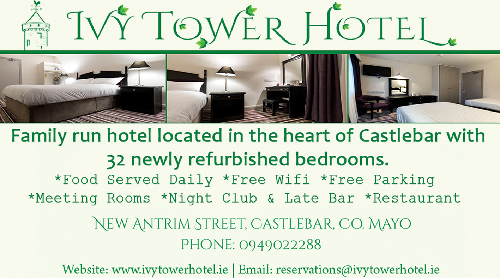 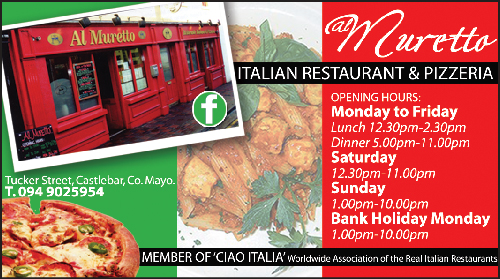 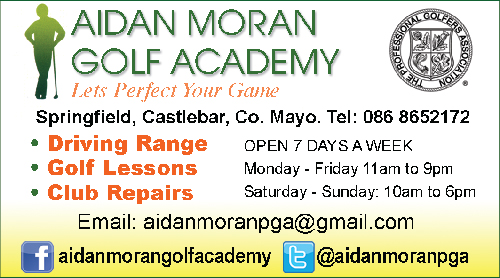 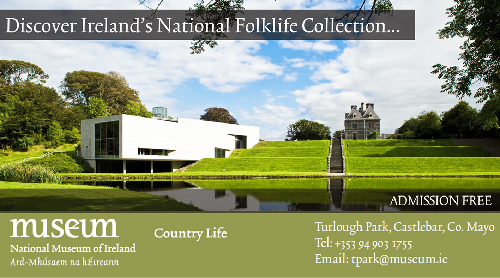 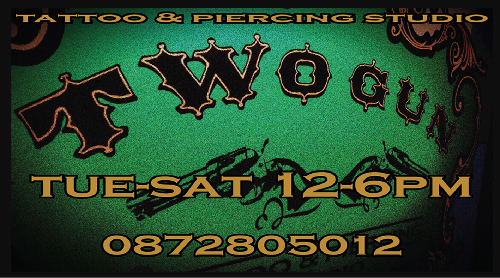 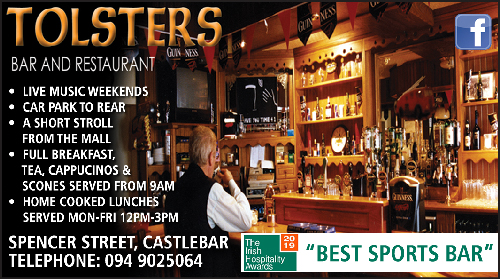 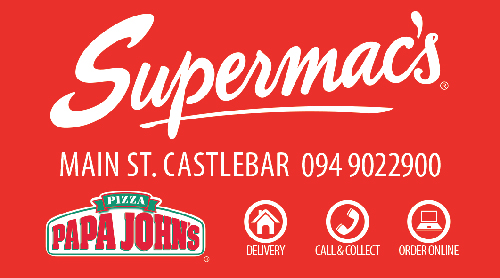 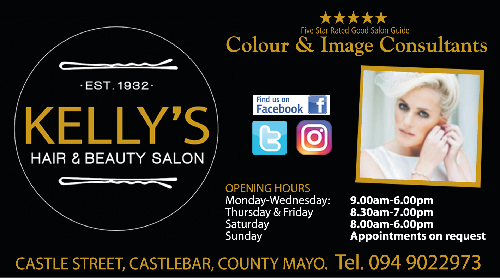 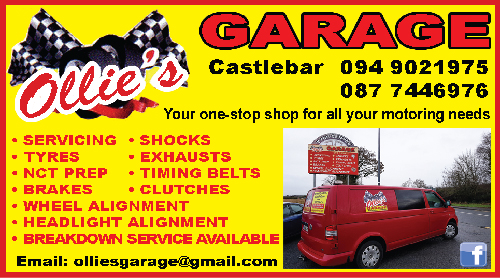 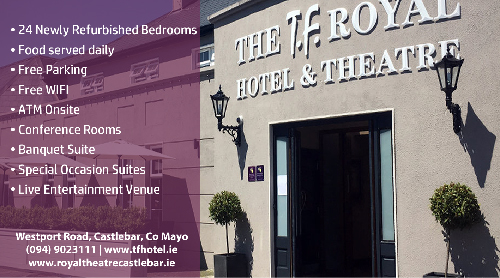 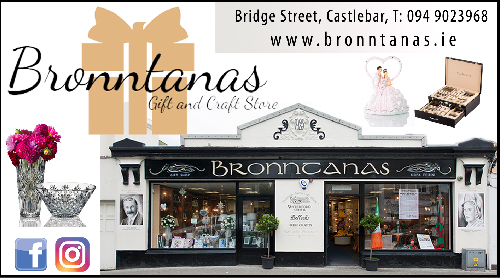 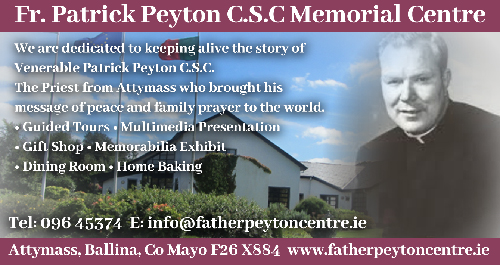 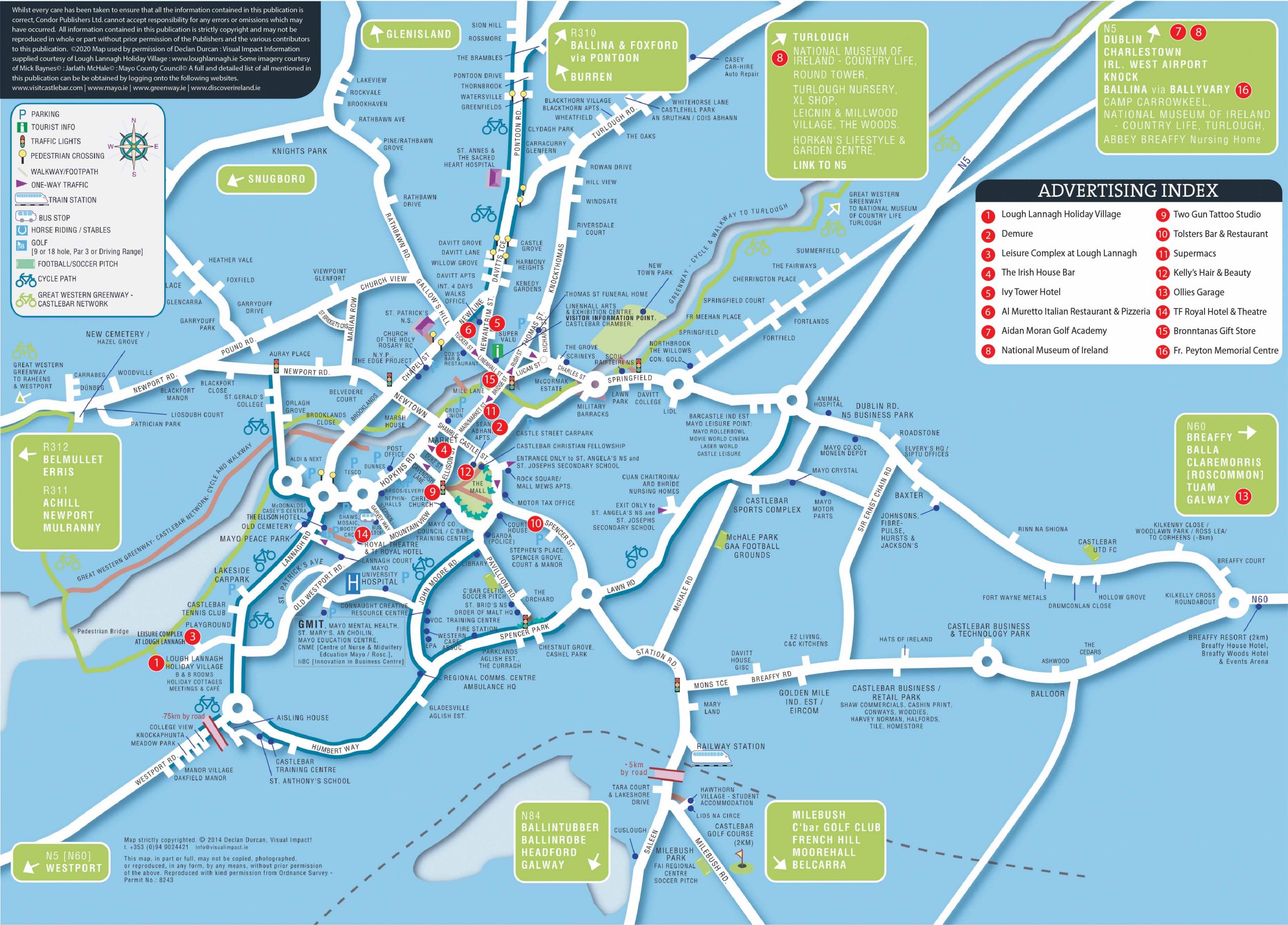 Castlebar Weekly Food & Craft Market – Mayo’s biggest indoor market where you will find the largest display of home-grown vegetables, home baked foods, hand-knits, crochet and handmade Arts ,Crafts and Jewellery. Relax with a cup of tea or coffee and some home-baked scones. Made by locals, supported by locals, you’re welcomed by locals.

Foody Tours: Exciting gourmet tasting tours for all foodies living in, or visiting, the West of Ireland. Expect a great night out especially in Castlebar and meet our artisan producers! Visit www.foodytours.ie

Places of Interest around castlebar

Castlebar Weekly Food & Craft Market – Mayo’s biggest indoor market where you will find the largest display of home-grown vegetables, home baked foods, hand-knits, crochet and handmade Arts ,Crafts and Jewellery. Relax with a cup of tea or coffee and some home-baked scones. Made by locals, supported by locals, you’re welcomed by locals.

Foody Tours: Exciting gourmet tasting tours for all foodies living in, or visiting, the West of Ireland. Expect a great night out especially in Castlebar and meet our artisan producers! Visit www.foodytours.ie

The History is on the Streets of Castlebar –  First settlement of note can be traced to the 13th century de Barra (Barry) family. Norman settlers, they constructed a castle in 1235 which lent its name to the town. Barry’s Castle, alas it remains no more. It was located between the Convent and the Military Barracks.

The Mall – Lined with beautiful trees, once the cricket pitch of Lord Lucan, who was known as ‘the Great Exterminator’ during the Famine 1845-47.

The Methodist Church – Founded by John Wesley in 1785.

1798 Memorial – This monument was erected in 1948 to commemorate the 150th Anniversary of the Races of Castlebar.

John Moore’s Grave – He was selected by General Humbert as 1st President of Connaught in 1798.

Davitt & The Land League – Formally Daly’s Hotel, where Michael Davitt (In conjunction with James Daly, editor of the Connaught Telegraph) founded the National Land League in 1879.

The Courthouse – Court sittings are recorded in Castlebar as far back as the 1600s. The present courthouse underwent reconstruction in the 1822. Beside here also is the birthplace of famous Soprano Margaret Burke Sheridan- Prima Donna.

The Linenhall, now the Linenhall Arts Centre, and Visitor Information Point – The original Linen Hall was built in 1790 by Lord Lucan as a clearing house for the flax and linen produced in the region and also as a storehouse for looms and tools. Visit www.thelinenhall.com

Cavendish Lane –  Called after Lord Frederick Cavendish, who founded the Connaught Telegraph newspaper on St. Patrick’s Day 1828. This is the oldest provincial paper still published in Ireland. The paper has as its Motto: “Be Just and Fear Not”.

Market Square – was originally known as Shambles Square. A Shambles or slaughterhouse once stood

Chapel Street – The Church of the Holy Rosary was dedicated in 1901. Replacing the previous church built in 1800

The Linen Industry –  The streets in this area of town took their names from the fact that planters were moved into the area from Ulster in the 1770s to develop the flax growing and linen industries.

Main Street and Staball Hill – In 1798 ‘The Year of the French’, one of the most important events in the history of the town took place. The major battle in which the British General Lake was defeated took place on the Main Street bridge. Prior to this the British had been chased down Staball hill, the Franco-Irish forces were cheered on by local tenants who shouted “Stab them All.” Hence the name Staball still exists up to the present day.

Castle Street – A jail once stood at the junction of here and Ellison Street. Stephen Garvey the famous musician was born on Castle Street. The de Barra’s original castle was built on the site overlooking Castle Street where the later military barracks was built.

Mayo Memorial Peace Park – A green oasis, created to commemorate the men and women of Mayo, killed in the world wars of the last century. A perfect place to pause for peace. www.facebook.com/mayopeacepark

Tennis under the dome or outdoors at the Connaught Regional Training Centre at Lough Lannagh.

• Bike hire with view of our Holy mountain to keep the spirit up!

Go up stream for white water kayaking and out the road for quad biking, or golf at the renowned Castlebar golf club.

The West of Ireland largest leisureplex with cinema, LaserQ,  bowling and the biggest concert venue in the West is at the Royal theatre and the Linenhall is the home of the oldest children’s art festival in Ireland, it is also a centre for exhibitions’, workshop and theatres productions.

From elite to novice all are welcome here, www.visitcastlebar.com

Here’s a taster, you can do it all or sit back and do nothing at all!

This award winning route now extends from Turlough to Castlebar to Achill. With lots of amazing detours you’ll want to stay longer or better still, come back for more. Rivers, bogs, forests, sea and awesome scenery. Pedal and electric bicycles are available to rent, with or without tour guides. Turlough to Castlebar (10km) (accessible to buggies and wheelchairs) Westport to Newport (12.2km) Newport to Mulranny (18km) Mulranny to Achill (13km)  www.greenway.ie and www.mayowalks.ie

Castlebar is home of the oldest walking festival in Ireland, the Castlebar International Four Days Walking Festival.  There are a series of walks from the town 10km, 20km and 40km.  Lots to choose from on or off road.  Join with our community every Saturday for the world wide Park Runs around beautiful Lough Lannagh.  Home to the Pink Ribbon Cycle. From a short spin out the road to 100km with Castlebar as your base.

Castlebar Network extends from the National Museum of Ireland – Country Life in Turlough village via Castlebar town, Lough Lannagh, Rehins Woods and onwards to Westport. The trail offers a pleasant mix of fields, riverside woodlands, small sections of quiet country back roads and urban settings. The Greenway has been designed for shared use by leisure walkers, joggers and cyclists and is suitable for people with easy to moderate levels of fitness. The route is mainly traffic-free and off- road with a solid surface, either tarred or compacted and can be used to commute to and from school or work. The Boots, Bikes and Boards Greenway Games Maps are available from Bikes and Boards at Lough Lannagh Holiday Village for those that want to explore and learn more about the route. Further information is available from www.greenway.ie | www.bikesandboards.ie

Things to do & Activities To Enjoy

Live Music 7 nights a week in Castlebar town. All genres.

From Bridge Street Bar, Garbos, Linenhall Art Centre & the Royal Theatre Castlebar, where a variety of music, theatre and comedy events are promoted in numerous venues.

For what’s on in all venues in Castlebar check out

Mayo Day is a celebration of our ‘Mayo-ness’ in Mayo Communities worldwide. People at home and away had an opportunity to celebrate all that is great about their progressive, can-do County. This day is an opportunity for Business, Communities, Families, Individuals to celebrate who we are, and where we come from, a day in the calendar year that recognises Mayo and its people.  May Bank Holiday weekend.

The Mayo Pink Ribbon Cycle, Supporting Breast Cancer Research From 10.00hr on the Saturday of the May Bank Holiday Weekend.  This year participants will have a choice of three cycle routes! All routes begin and end in Castlebar. There is a choice of three different routes – one to suit each level of fitness and all with stunning views of Mayo. 51km, 111km and 166 km.

West of Ireland Women’s Mini Marathon, Castlebar, Mayo. Join 3000 women from midday on the Sunday of the May Bank Holiday Weekend, family fun afterward on the Mall.

Mayo International Choral Festival – Visitors will experience the warmth & hospitality of local people & choirs, share the spectacular Mayo scenery, lively traditional music, Irish culture, and compete in a great festival. On the fourth weekend in May.

Castlebar International Walking Festival – The Castlebar International 4 Days’ Walks Festival has attracted walkers from every corner of the world since it began in 1967. This is the ideal opportunity to walk, talk, and discover the bogs, rivers, mountains and unspoiled beauty of the West of Ireland with kindred spirits. This is the oldest and friendliest of Walking Festivals in Ireland. On the first weekend in July (commencing on the Thursday).

Irish Music & Dance Night –  Cox’s Pub & Restaurant are proud to present, free of charge, a showcase of world champions in Irish music and dance for the summer. A SESSION to remember! Every Thursday night from 8pm there will be a riveting performance of the best music and dance in the West. Every Thursday in July & August @ 8pm

Bonamh Market & Heritage Day – Sees the traditional “pig market” area of the town in Rush Street turn back the clock and recreate the Bonamh Market of old. The street comes alive with the sound of cattle, pigs, sheep, farmers doing deal, children playing music and local traders plying their trade like in the days gone by. That night there is more fun and music on the street. On the third weekend in August.

This festival aims to celebrate the literary heritage of our rugged coastline over a weekend of readings, recitals, debates and reflection, while also acknowledging new and emerging writers. Held on the second weekend in October. www.wildatlanticwords.ie